The Heart of Budapest

After our unladen mountain excursion in Slovakia, the bikes once again felt heavy as we waved goodbye to Victor and made the push toward Budapest. The imaginatively named R2 road, that lead us to the city had been pretty but uneventful.

On the outskirts of this legendary city our excitement grew. “Budapest, Budapest,” I blurted to Lisa over the Autocomm’s.

It strange but as Brit’s we’ve been hearing the name Budapest our entire lives, but the name sounds so, so, exotic. Should this city be somewhere more remote and dramatic than Hungry? OK, enough thinking out loud. I’ve just pissed off every Hungarian reading this…sorry guys.

As is now our usual form, we rode straight in the centre of Budapest and slammed into rush-hour. The four clearly marked campsites on our maps were harder to find than Bigfoot, and two hours later, after a dozen stops, countless u-turns and ton of swearing, we finally picked up our first sign for Squirrel Camping. Six km’s later, having weaved through the city we slid through the battered wooden gates of the camp site and sweaty and tired, pull-up and kick down the side-stands.

It was fast becoming dark as we struggled to pitch the tent in the small, narrow but steep valley of Squirrel Camping. Small short pitches have been cut into the dusty ground of the hill face and our Hilleberg tunnel tent barely fitted and by the time we finished both the tent and ourselves were covered in a black, layer of dry, ancient dusty earth.

With our bikes locked and tucked up safe we headed for the showers. Funny thing is on the way to the showers we somehow detoured and ended up at the bar and after 2 or 3 beers we said “screw the showers, we’re bikers, we’re meant to be dirty!”

The 158 bus picked us up right in front of the campsite gates and 15 minutes later dropped us at Moscow Square in the heart of Budapest. Twenty minutes later and it was easy to see why Hungry’s Capital is ranked as one of the most beautiful cities in Europe. 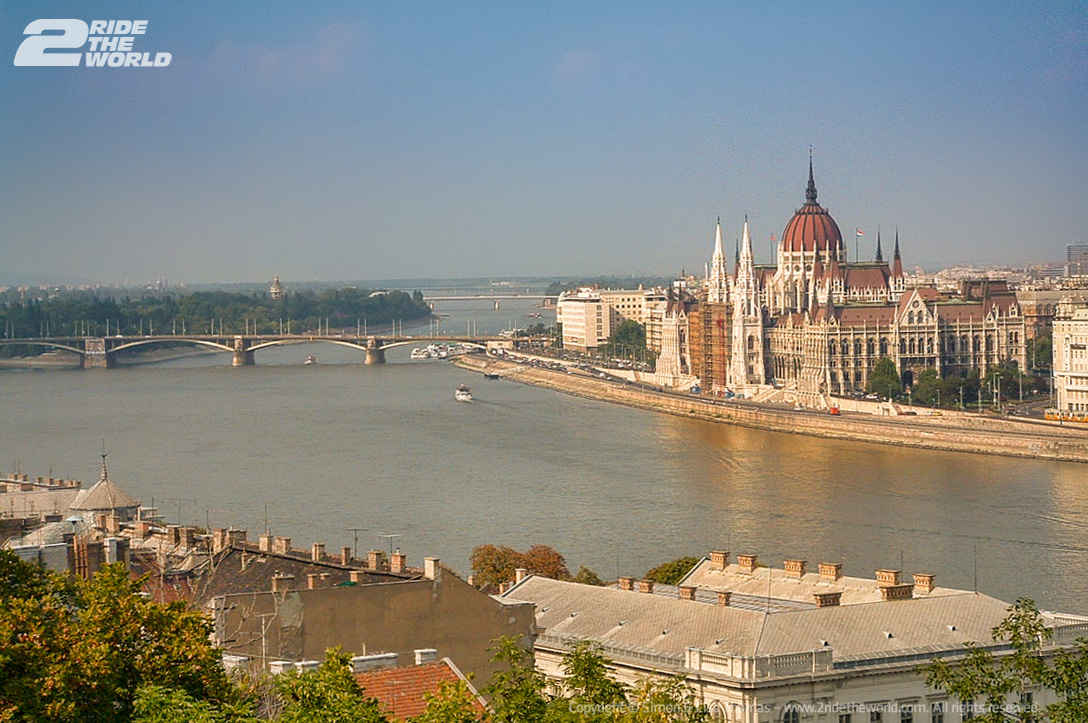 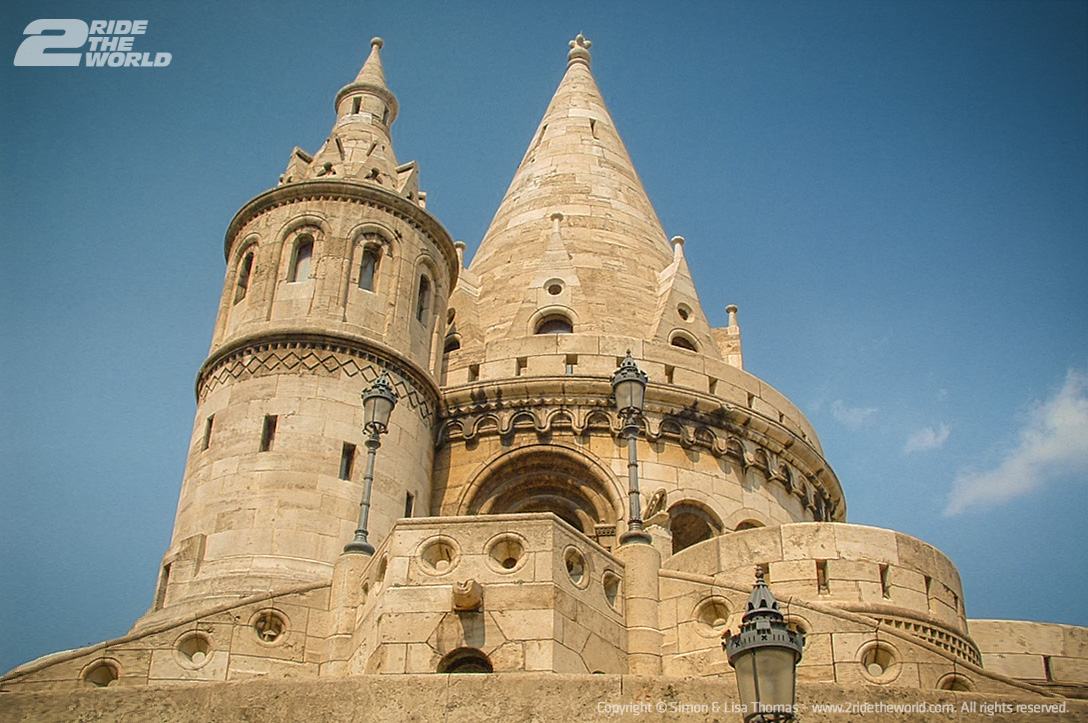 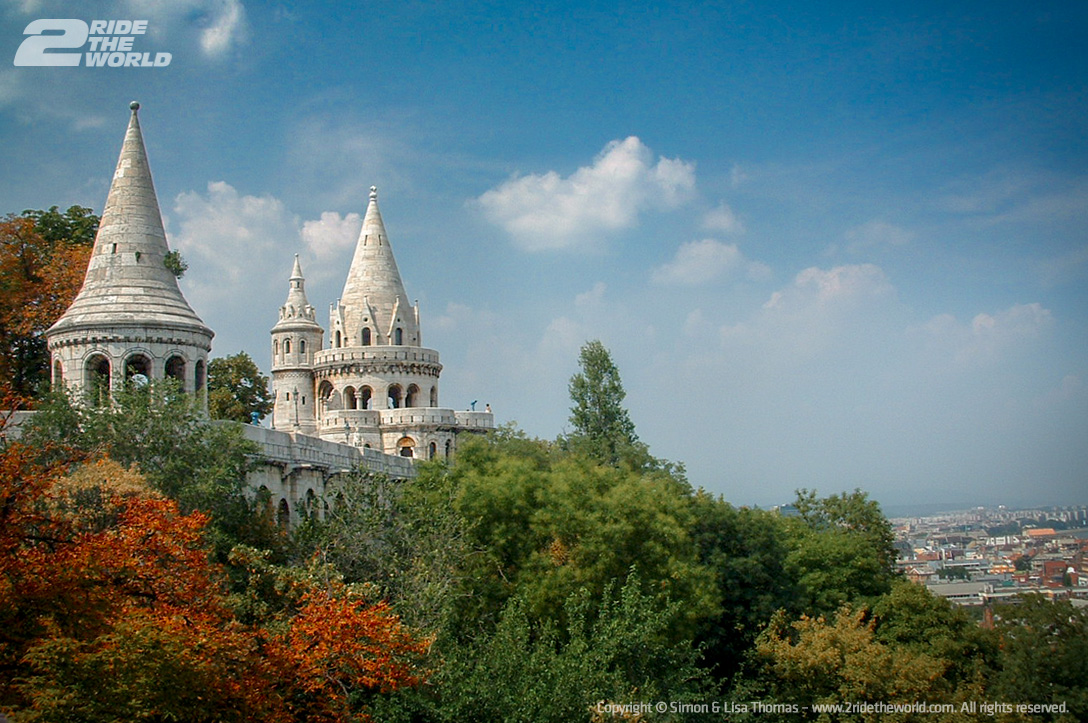 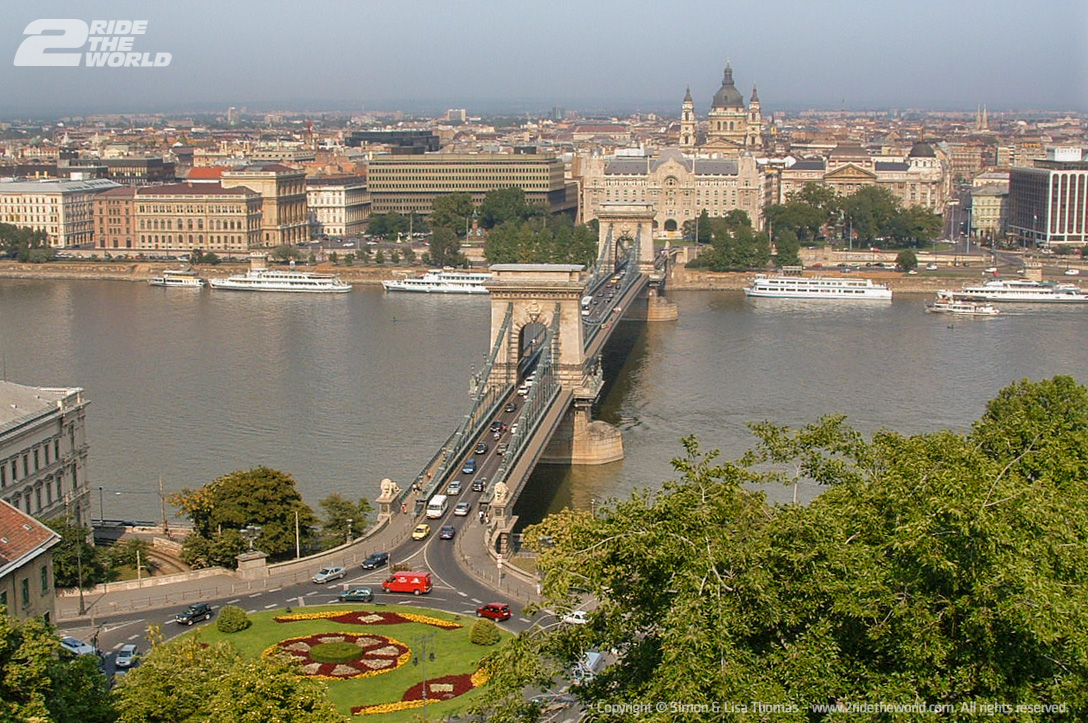 A walk along the banks of the Danube felt like the right thing to do, and before too long we had picked up a tourist map and chosen some of the prime sites to see.

This stunning city is actually formed from two separate ancient settlements, which sit on either side of the River Danube: Buda, a former medieval citadel town, situated amongst rolling hills and the newer Pest area with its 19th century buildings.

We’re only spending a day in Budapest; so choose to explore the older Buda side with its hot springs, churches and castles. In basking sunshine we climbed Castle Hill, and at the top we found, unsurprisingly, …Buda Castle (the “Vàr”). Castle Hill is one of the most ancient parts of Budapest; medieval walls fence off a ‘town within a town’ – ancient Buda.

Bypassing all the normal tourist traps we stopped for lunch in Trinity square and enjoyed the cheapest goulash we could find, whilst in the shadow of the 80-metre tower of Matthias church (also known as the Church of our Lady). Lunch finished we decided not to go into the church itself, mostly due to cost and instead decided to investigate the beautiful turreted walls and the Fisherman’s Bastion – a fairy-tale like fortification which flanks the Danube side of Matthias church and which provided us with glorious views of the Danube and Pest. 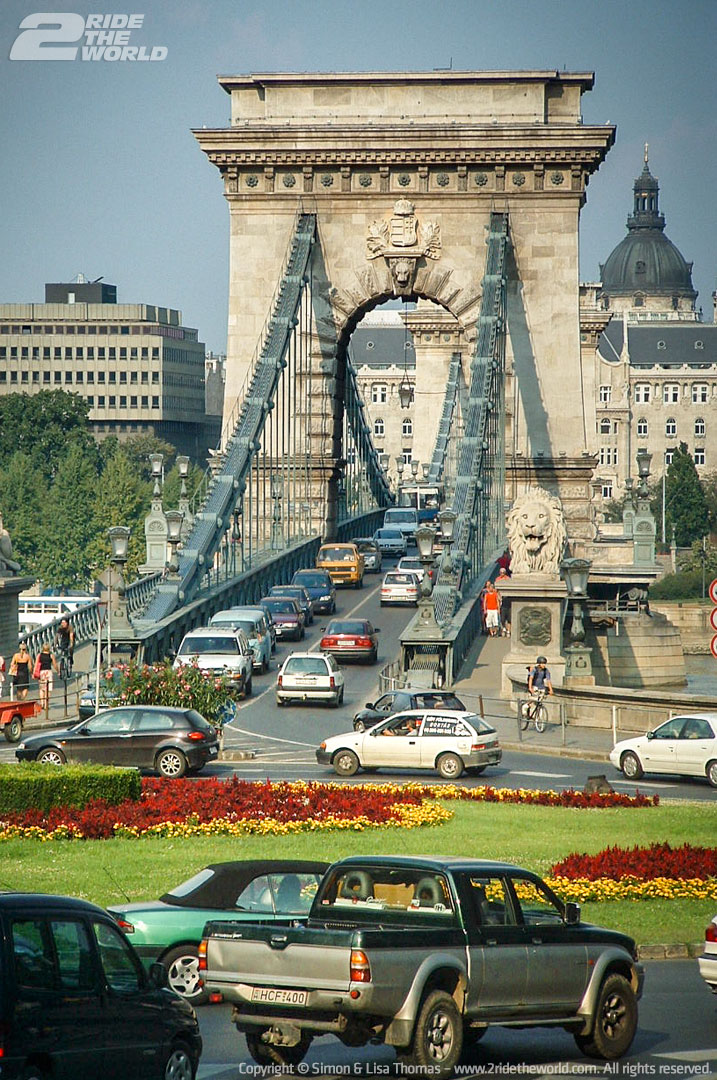 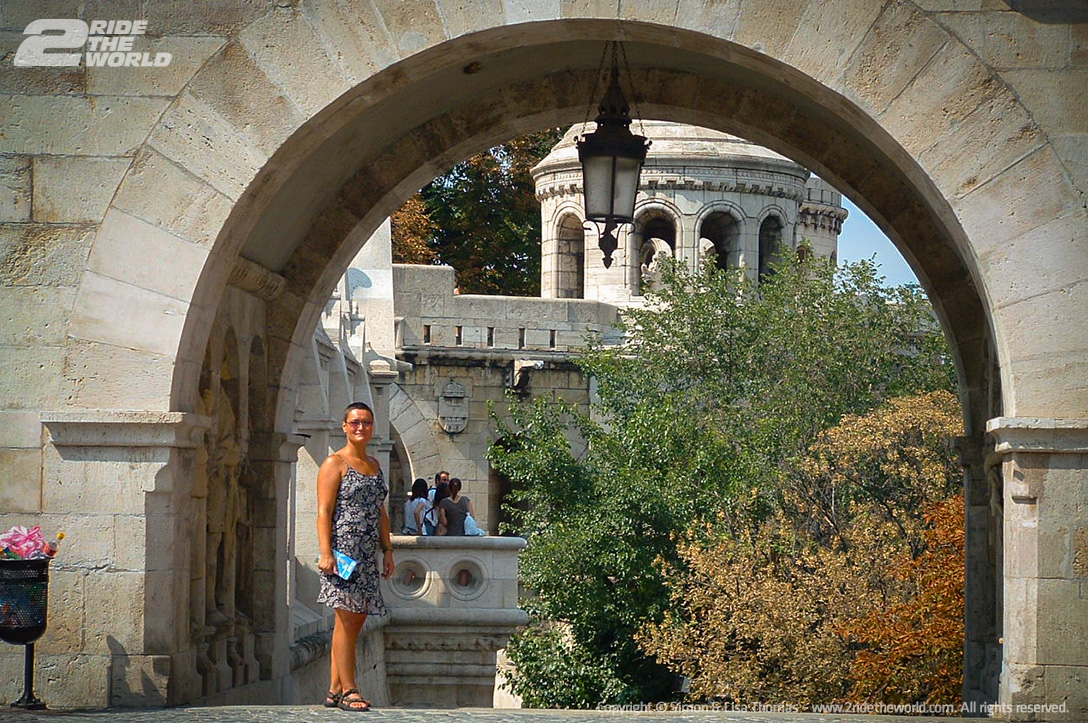 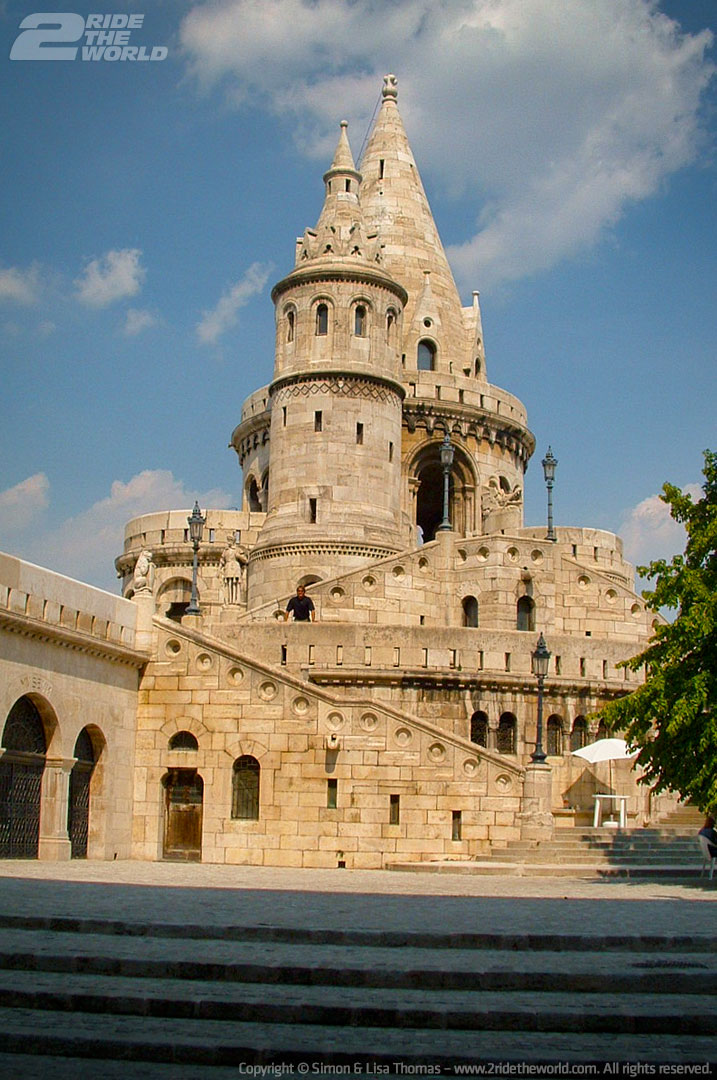 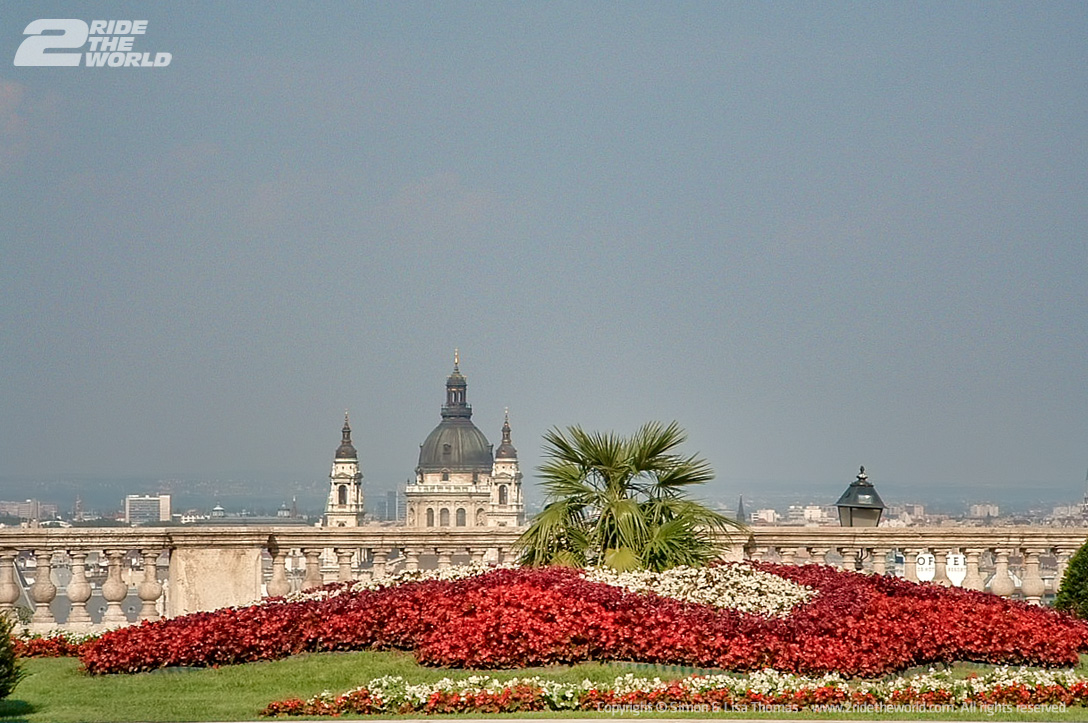 As if to prove that all of this ‘culture’ wasn’t going to our heads we found in front of Matthias church a wonderful statue of an imposing man astride a fierce-looking horse, not knowing who the statue was of, we spent the day referring to him as ‘CAPTAIN GEEGEE’, only later on in the afternoon did we find out that the imposing statue was, in fact, St Stephen, the founder of the state and the first King of Hungary!! We still think that ‘Captain Gee Gee’ has a certain noble ring to it! Having walked all day in unrelenting heat we once again boarded the 158 and headed back to our dusty home. 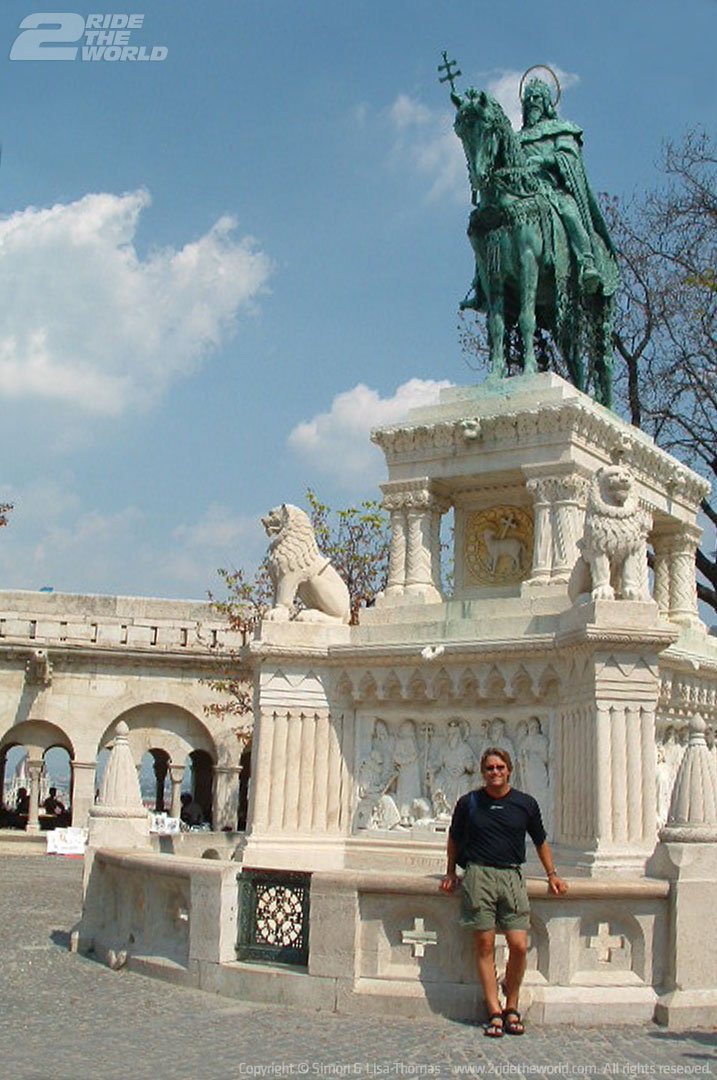