We’d planned on setting out early but there were a few jobs to get to first, which meant finding the offices for the national telecom company of Cuba, so we could buy an internet access card.

We’d managed to buy one from a street vendor yesterday and I’d picked up some bad news. A scary two-lined email from my mum, which just read “please see Facebook, I’ve had an accident and broken both legs!” Holy shit!

Needless to say I’ve been panicked ever since reading that email, and I really need to know what’s going on, and of course how she’s doing. Mum, if you’re reading this, consider yourself told off! 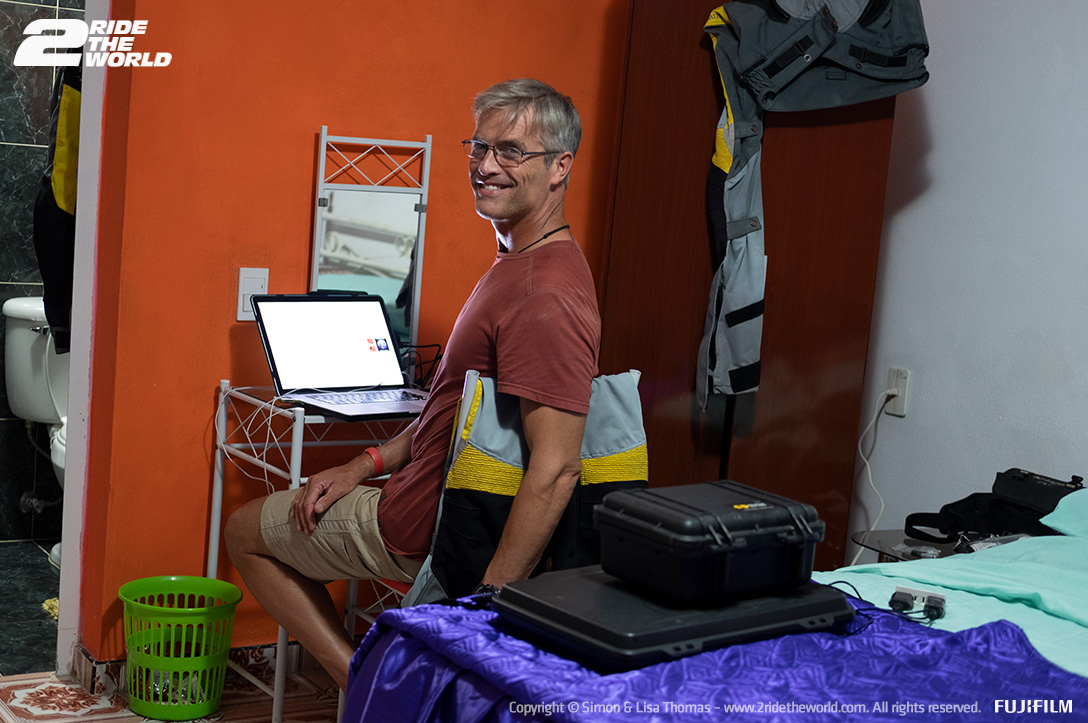 We’d lined up for an hour outside the telecom offices before being let in to buy the internet card, which cost me $1. Back in the Parque Ignacio Agramote, Lisa logged on with her phone and another batch of emails rolled in. Quickly scrolling through for emails and updates from my family, I was soon more informed and a lot less stressed. My mum had fallen and broken both legs. She was now laid up, but recovering at home. I hope that I can get in contact when we reach Jamaica.

The other big news was that a good friend has been able to deal with the US DMV offices and had been able to change the colour of the bikes from their original white to their now red and blue. We need new, updated vehicle registrations documents, with the new colours in order to be able to apply for and collect our Carnet de Passage document for both bikes that we need for Africa.

An hour and later and we’d checked off a long list of jobs and our time had run out. Around the corner from the square, we found the simple and Spartan café we’d enjoyed yesterday and ordered four espressos and a simple ham sandwich.

It was now 9:50am and we needed to make a move. I pulled the bikes out from Orlando’s living room, whilst Lisa brought the bags and gear down from the room and to the front of our Casa particular.

As we loaded and tied down our gear, the crowd grew and the usual questions were asked. “How far, how much, how long, how expensive, where next?”

We handed over $60 pesos ($60USD) for the two nights to our host and another $10 pesos to Orlando for the parking.

With a dozen turns made, and a few intentional quick trips the wrong way, down one-way streets, we finally found the main road and joined it easily. Fuel had been easy to find but had cost us another $50 pesos ($50 US) to fill up with gasoline especial. The money is flying out of our wallets here.

Out of Camaguey and the light traffic became even lighter as we carefully buzzed past more horse drawn buggies and labouring cyclist, who struggled to climb the gentle but long hills east of town.

So much of the dry looking landscape reminds us of Brazil, but then moments later and we’re passing forest of cedar and stout Europeans trees. We could easily be back in the Somerset in the UK…weird. 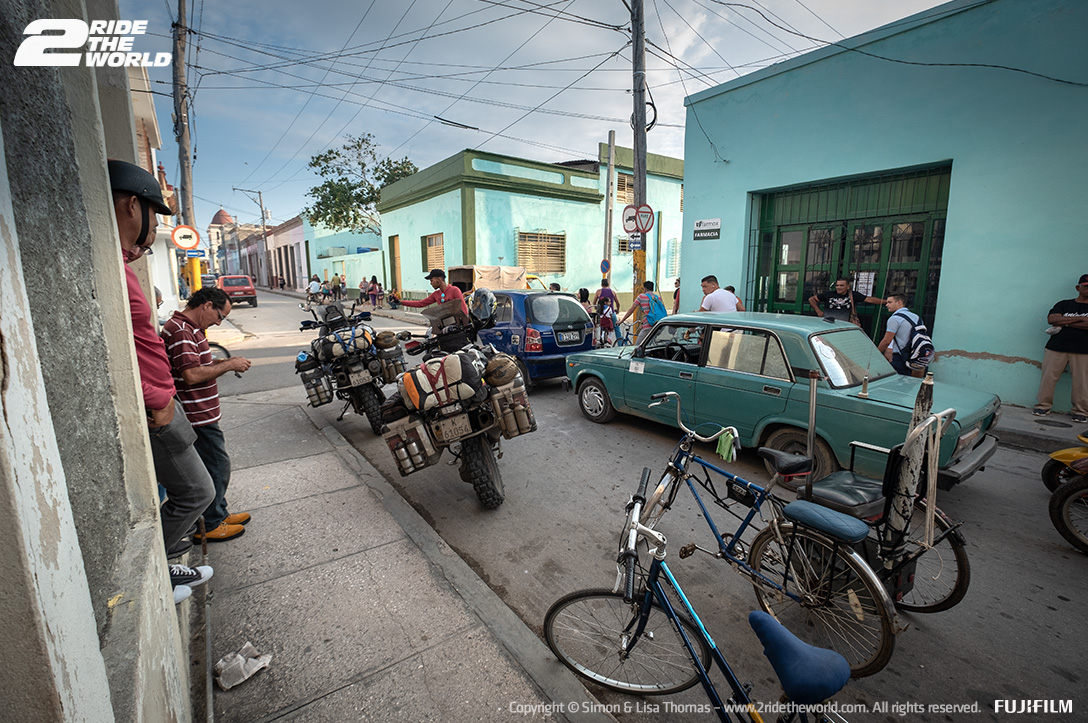 The bumps and groves in the undulating tarmac kept our attention, especially on the bends, when you have to be prepared to come to a grinding stop, for a bus, truck or buggy that’s crawling behind another cyclist. No-one seems to mind. The driving here is chilled and we’ve seen no aggression on the roads. It makes a change.

The recent rain that now lay in deep pools by the roadside was only adding to the sweltering humidity. I’d been thirsty since we left the casa de particular and my throat was now parched. In a small village, we pulled over and as Lisa checked over the bikes, I headed into the small café and picked up a carton of mango juice for $2 US. Outside and the crowd had already gathered as Lisa and I gulped down the sweet juice. I ended taking photos of the crowd taking photos of the bikes. While we were stopped, It seemed like a good opportunity to check and tensions Lisa’s chain, I’d meant to deal with last night but got lazy and didn’t get around to it. We left to cheers from the crowd still gathered behind us.

We chose the smaller roads today; they give us a chance to see the real Cuba. Mango trees line the road and I lost count of how many oxen we saw pulling simple wooden ploughs. Older men sit on their doorsteps puffing on thick dark cigars and watch the world pass by. We’ve been surprised by the number of tourist coaches we’ve passed. However, we’ve also been surprised at the quality of driving here in Cuba and the level of courtesy shown by most. 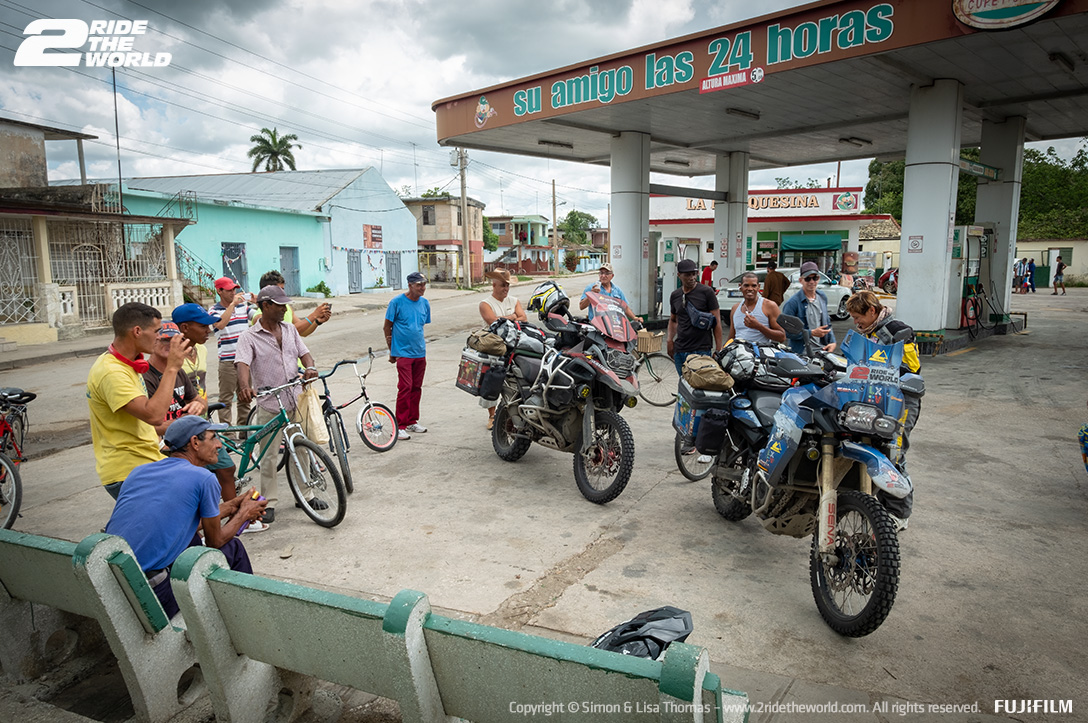 Car drivers actually use their blinkers to let you know if they’re turning. Most even check before pulling out. In Mexico, we’d become accustomed to drivers simply pulling out to overtake whatever was in front of them, without the slightest consideration of consequence of those around them. But, in Cuba, drivers do check and consider their actions, before they take them. Sure, you’ll still get the occasional numpty, but on the whole the driving and by association the riding here is great.

Staying on the asphalt, we arrived in Holguin, Cuba’s 4th largest city by early afternoon and rode to the centre of the city and the main plaza’s in the hope of finding a casa de particular. The second one we spoke to was available and offered inexpensive secure parking at another case just one block around the corner.

As Lisa pulled the bags inside and off the street, I parked the bikes. I’m a little concerned by a strange but loud fast clicking sound that seems to be coming from down by the right foot peg, when I turn my (R12gs) bikes power on and off. It sounds like the battery when it’s dead and the engine wont start, but that’s not it. If I had Internet, I could get online and check.

The heat and humidity has really got to us today, and we’re both feeling tired. With MX boots changed, for flip flops we head the two blocks to the main plaza and treated ourselves to ice creams served in glass cups with wafers. The bill came to 15 national (40 cents US). 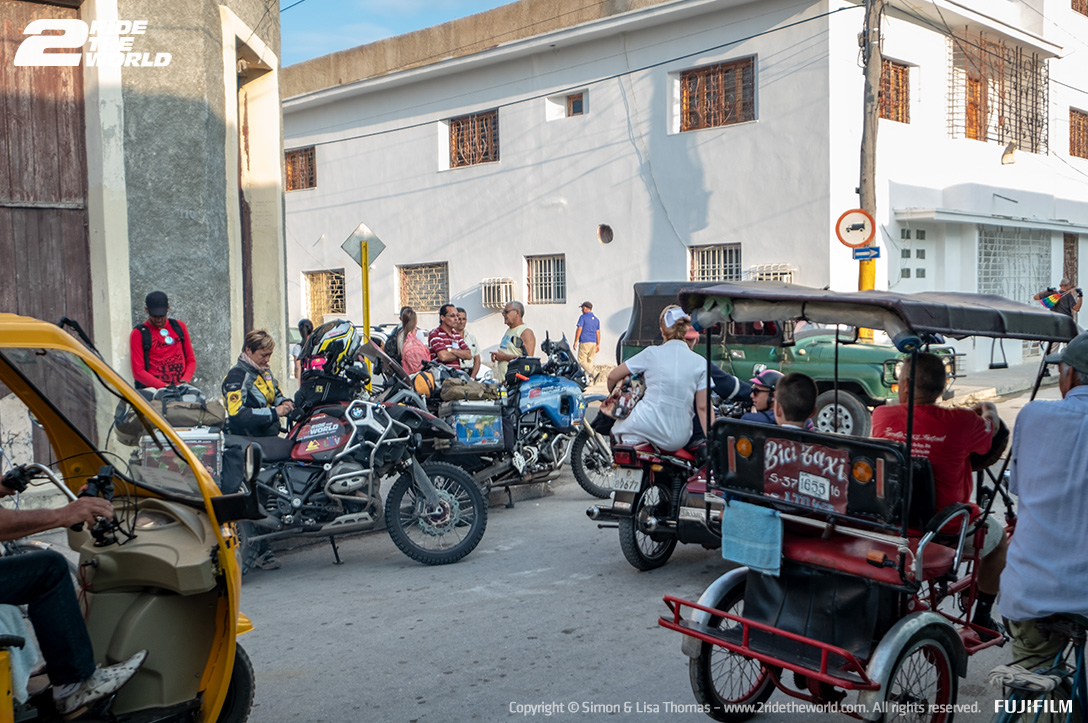 Dinner was courtesy of one of Cuba’s most famous bars, the La Bodegita Del Medio. The original bar had been opened in Havana and quickly became the ‘place to be seen’. The current owners had opened up a sister bar/restaurant here in Holguin. With a group of five older musicians playing traditional Cuban music, we enjoyed a couple of cold beers at the bar before deciding to eat. The cold beer was delicious and we ate roasted pork, a specialty of the region and Ropa Vieja (literal translation old clothes?), which is portions of shredded beef in sauce. Four beers, two bottles of water, a starter of vegetable croquets and the two main meals set us back $8 US each. It was our first meal of the day.

We’re back at the casa right now. Lisa asleep beside me and I’m typing this up. We plan to head out and be on the road by 7:30am tomorrow and hope to reach Baracoa on the coast by mid afternoon.