Pirates Of The Caribbean

The Stahlratte’s engine chugged to life at 11:30am, and by 12:00pm we were slowly moving out to sea. Ludwig had wanted to sail a day early because of a storm front that was moving in from the north.

Out of the protection of the harbour and the Stahlratte was already rolling as the crew yelled instructions to one another in German, yanked ropes and hoisted the seven giant sails of this incredible vessel. A loud crack in the air was audible over the noise of the wind as each sail, filled, billowed and caught the wind. An hour later and we were really moving. 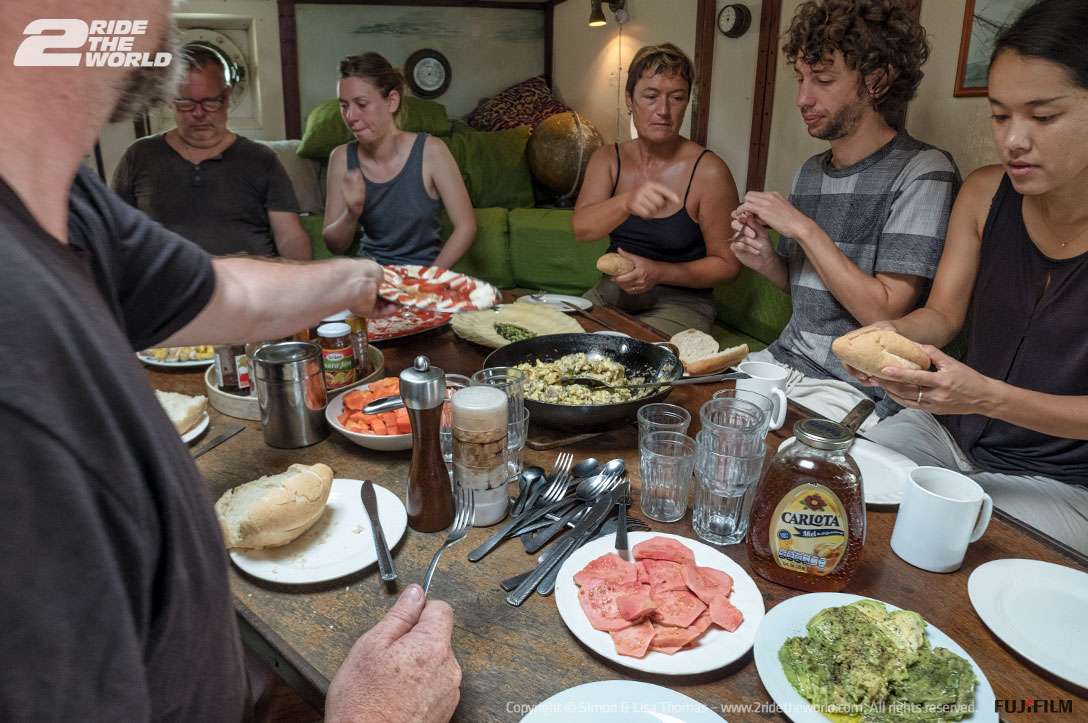 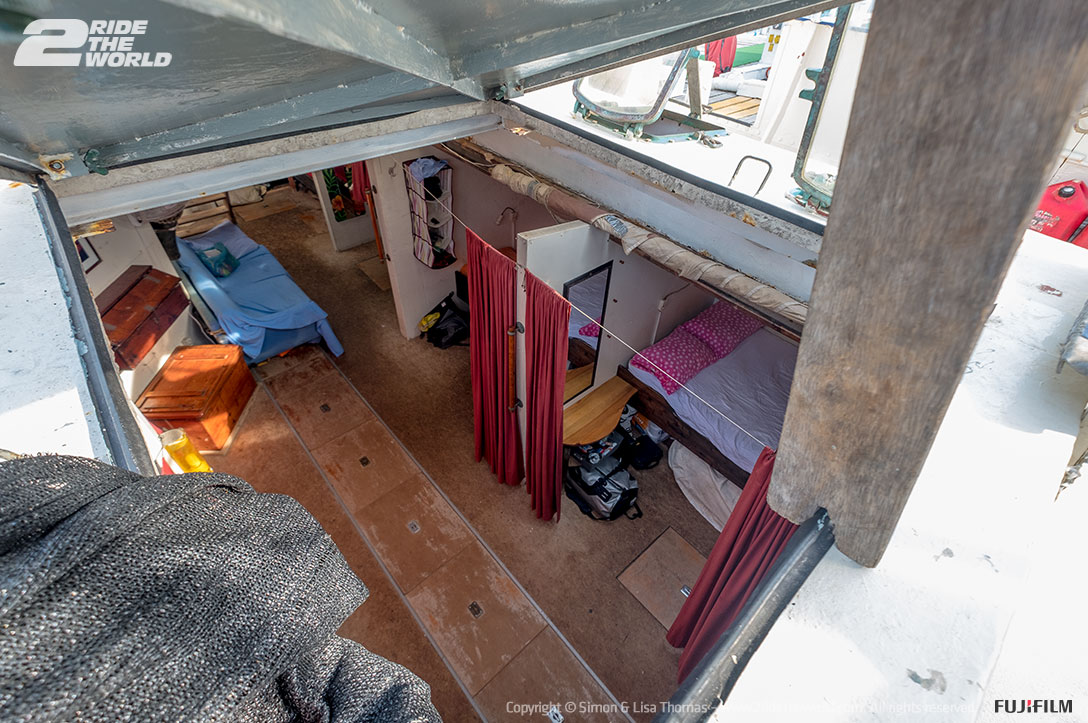 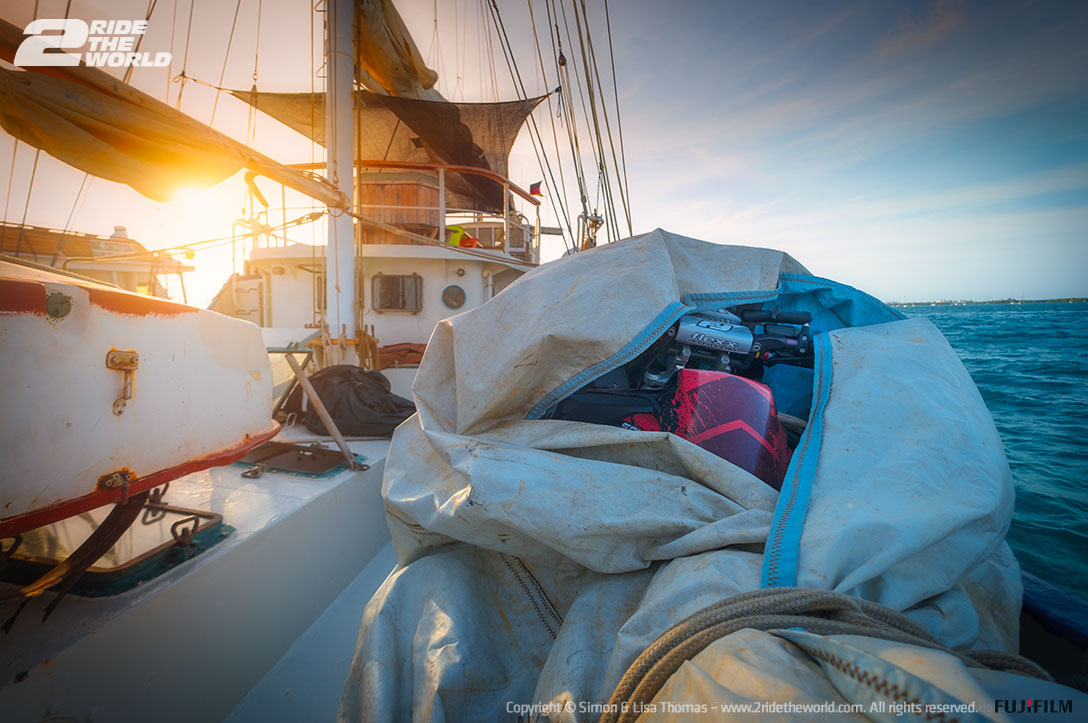 I’d left Lisa on her bunk feeling sea sick and headed to the top deck in the hopes that the wind and noise would distract me from the waves of nausea that were now hitting me.

“Is this fast?” I’d asked naively. “Yah, this is racing speed. The fastest this ship has ever sailed is 12.6 knots. Right now we’re at 11.2 knots.” The grin on Ludwig’s face confirmed he was in his element. 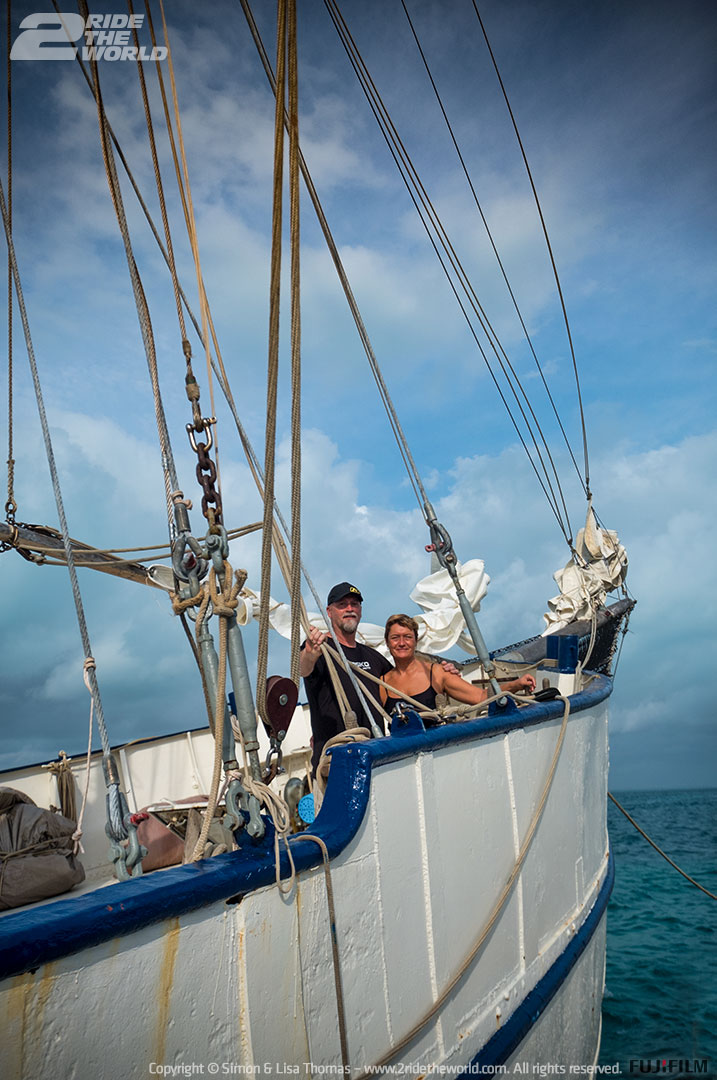 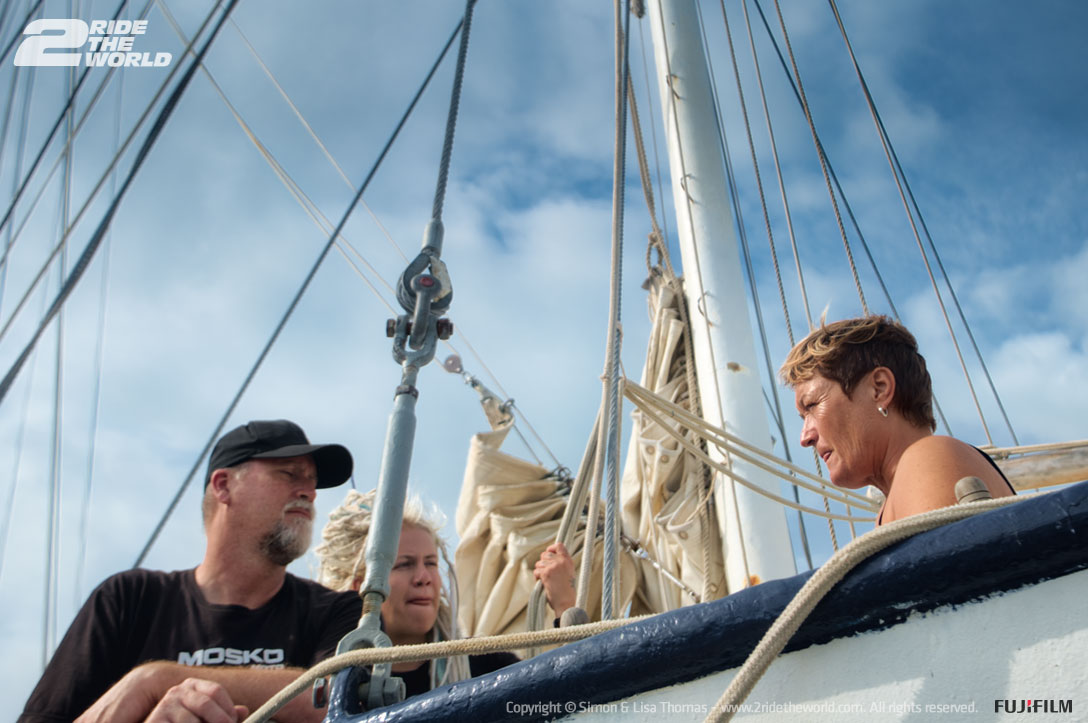 As the hours rolled by, literally, the sea became rougher the wind blew stronger. Minute by minute the sky became darker and the horizon harder to make out. I swear to God, staring at the horizon had been the only reason I’d managed not to vomit so far. As night closed in, I knew I’d lost the battle, and was about to say ‘hello’ to whatever was still sloshing around in my stomach.

I scrambled to make the nine metal steps to the lower deck and to the side of the ship. In the darkness, Lisa bumped past me, as she headed to the top. I managed to get the side as a let out an almighty “Blahhhhh” as I hurled. The ship was now listing hard to the starboard (the right) and dipping impressively low in the water, pushed along by the wind in the sails. I then hurled again and again and, OK you get the idea. I crouched, cried and dry wretched for the next two hours.

Ludwig had warned us that we may hit some bad weather, which is why he wanted to leave a day earlier than planned. I was, however, still apprehensive. I always feel sea sick even in the most calm of seas! I had taken sea sickness tablets and hoped for the best.

As we left harbour and the protection of land the seas became a little rougher and I began to feel a bit queasy. This was, I later found out, nothing! The ship began to, not only go up and down from front to back (yeah yeah I know there’s proper shipping terms) but also side to side- so it was kinda doing a figure of eight movement whilst plunging and lifting at the same time. ARGH! Heading downstairs I was thrown from side to side having to grab onto what I could to try to steady myself. After a massive effort I dashed for our bunk and lay down as fast as I could. Ludwig had recommended that lying down here was maybe best as the movement was less down here. I immediately felt better and managed to sleep on and off for a couple of hours, whilst trying to stop myself from tipping out of our double bunk.

It had just turned dark and the storm had become even worse. Karl and Paul (trainees) had donned their warmer gear and were up on deck keeping watch. Paul (RTW) was also on the top deck lying down trying to not throw up whilst watching the horizon (which was difficult as it kept disappearing). Egle was fine! Simon was struggling but hadn’t yet thrown up.

Suddenly I had to move fast. The vomit was coming and even though I tried hard by covering my mouth with my hand to try to force it to stay in- it wanted out! I clambered up the step steps and managed to get to the open door and almost reached the side before…too late! I had vomited all over one of the seats and missed the edge by a couple of feet. I didn’t care as it kept coming. Had I eaten that much? Why is there always more vomit than you have eaten in the last week!? Egle came to help and as I was struggling to clean up and offered to do it for me! Wonderful girl! It was all I could do to blurt out thank you before having to run again- this time I managed to do it over the side.

With the seas becoming rougher by the minute I got worse and worse and also frightened. Id never been in seas like this before. If I hadn’t have been feeling so bad it would have made for a great recording. The boat was dipping deep on one side as it lurched and twisted- it was the side my bike was! I saw my tarp covered and strapped bike get covered with crashing waves as they came over the side. Thank God these guys know what they are doing when it comes to lashing and covering bikes and keeping them safe!

I now decided to head up to the top deck as even though the movement was accentuated, I was in the open. Sitting on the deck ( I couldn’t manage to get any further) I vomited again but this time on the wrong side of the boat and it all came back at me! Funny now looking back but at the time I didn’t care.

I remained up there for a couple of hours before finally, succumbing to the chill as I was wet with waves and vomit I lurched back down to the bunk. I hadn’t thought where Simon had been during this time, but there he was, passed out in bed looking green. I was sorry but also not! At least it wasn’t only me!

During the night even the young crew, Karl and Paul, admitted that this had been a very rough night and even they had thrown up. Ludwig and Anna seemed totally unperturbed and just said it was a little rough but not much!

Sleeping as much as we could we both lay like dead things. Neither of us wanted food or fluid. Yeah, we know fluids are needed!