The sun was already roasting as we made the eighth run back to the ship to collect bags and gear, which we then strapped to the bikes.

As I strapped the last bag down, we waived our goodbyes to Egle and Paul as they headed out of the port and swung a left to start their Cuban adventure.

With the last clasp of her boot firmly shut, Lisa threw her leg over her bike and lifted her heavy F800 to upright. Seconds later and we were rolling through town, collecting as many stares as we had done yesterday.

Outside Cienfuegos we headed north west towards Real Campina. Like so many countries before, we carefully chose a steady pace, whilst we got to understand the new “rules of the road”. Hey, each country is different, with different tolerances and even a different tempo to the traffic. 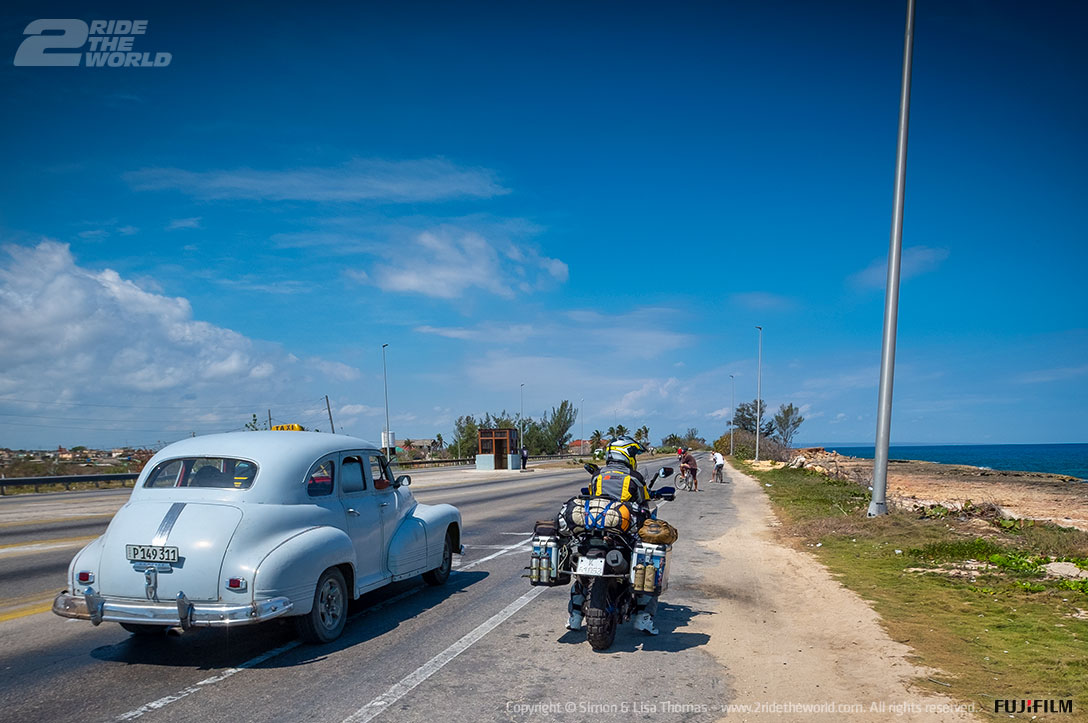 Thirty six miles later and we chose to shun the main A1 (Ruta Nacional Highway) and headed across a pot-holed bridge and pushed on.

Thickets of trees’ scattered an otherwise arid but agricultural landscape and we spent the morning dodging and waiving to a mixture of diesel belching tractors, cyclists and speeding horse drawn buggies.

By the time we’d reached the city of Colon, we were thirsty and in need of a stop. 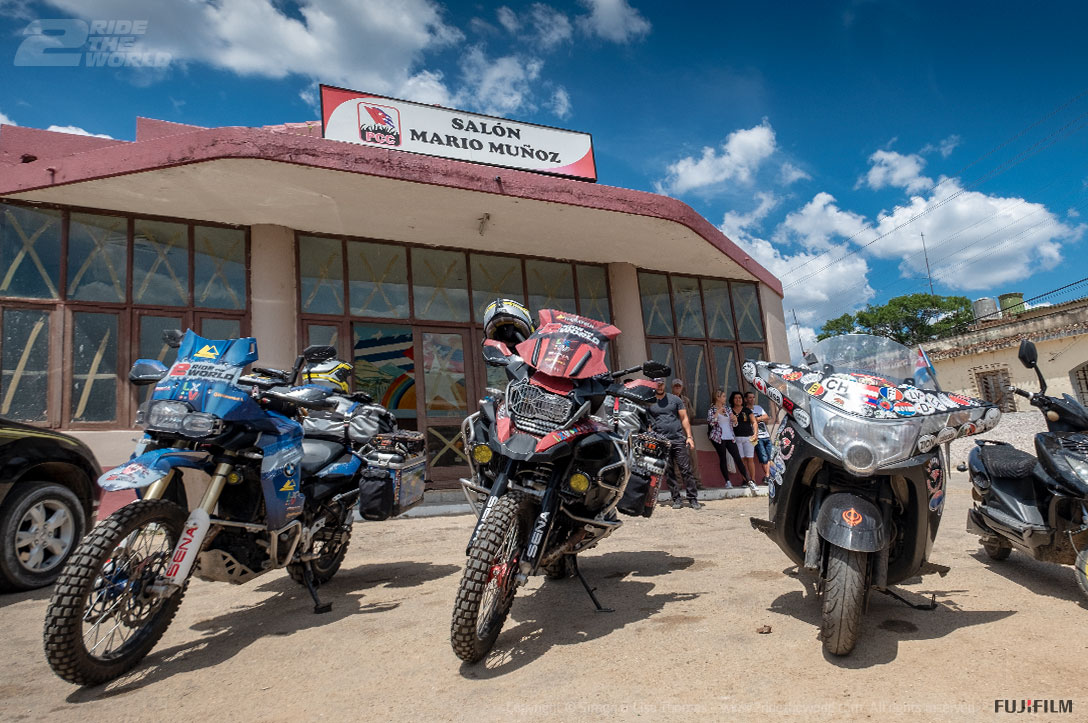 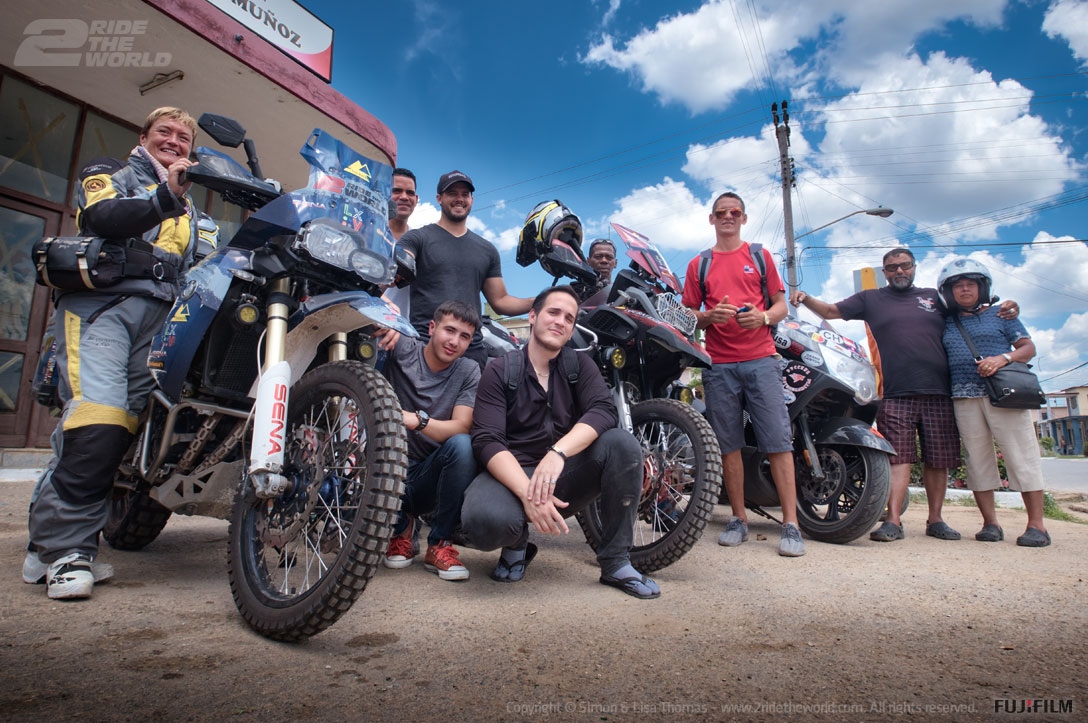 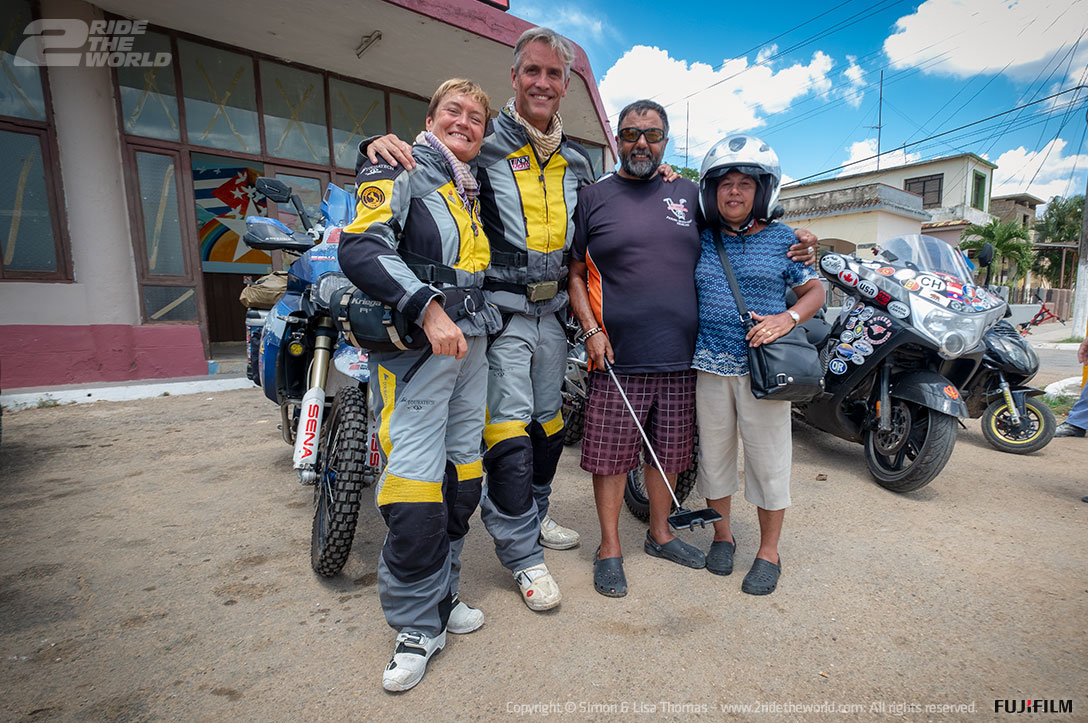 The small roadside café was empty as we pulled up close by. By the time we tucked into our hastily ordered cheese sandwiches, every member of staff from the government building opposite was standing on their office balcony and snapping photos on their phones. Over by the bikes, 30 people milled around, gasped and pointed excitedly.

Just as we were almost ready to leave and having our few last photos taken by passers by and the café staff, a large black motorcycle pulled up beside us.
Off hopped, what we thought was a local, until he spoke “Ello! Com far?” in a heavy east London accent. Mr Singh was riding through Cuba with his wife on the back of his 2010 1800CC Victory cruiser. The whole thing was covered from front to back with stickers of countries they had been through. After chatting for 10 mins and taking the mandatory group photo we wished each other well and headed off. We watched as they pulled away with a mixture of envy and concern as they wearing just t-shirts, shorts and sandals.

Finding our way our of town was easy and we continued on our way towards Varadero on the northern shore of Cuba and only an hour east of Havana.

After a 111 miles of bumpy and pot-holed roads we swung right at the roundabout and onto the Varadero, a long thin strip of land jutting into the Caribbean sea, where we rode to the end for the sheer fun of it. With more hotels than you can shake a stick at we were amazed at the towering plazas, hastily constructed for the conventional tourist. A quick scan of our guidebook had already confirmed that they were way out of our budget with prices starting at $200 and upwards. Anyhow, we were not looking for this type of overnight stay.

With a u-turn made and back in Varadero village, we double-checked the small map in our LP guide book and headed to Bennys Casa, which, when we arrived, were already full so we stayed in the Casa Particular next door. There are so many to choose from in this one block alone.

I’m not sure what we expected, but for $30 per night we had a large, freshly painted room decked out with antique colonial furniture, a hot shower, large bathroom and a new AC unit. The small fridge in the corner of the room was full to bursting with a selection of water and local Cuban beer. 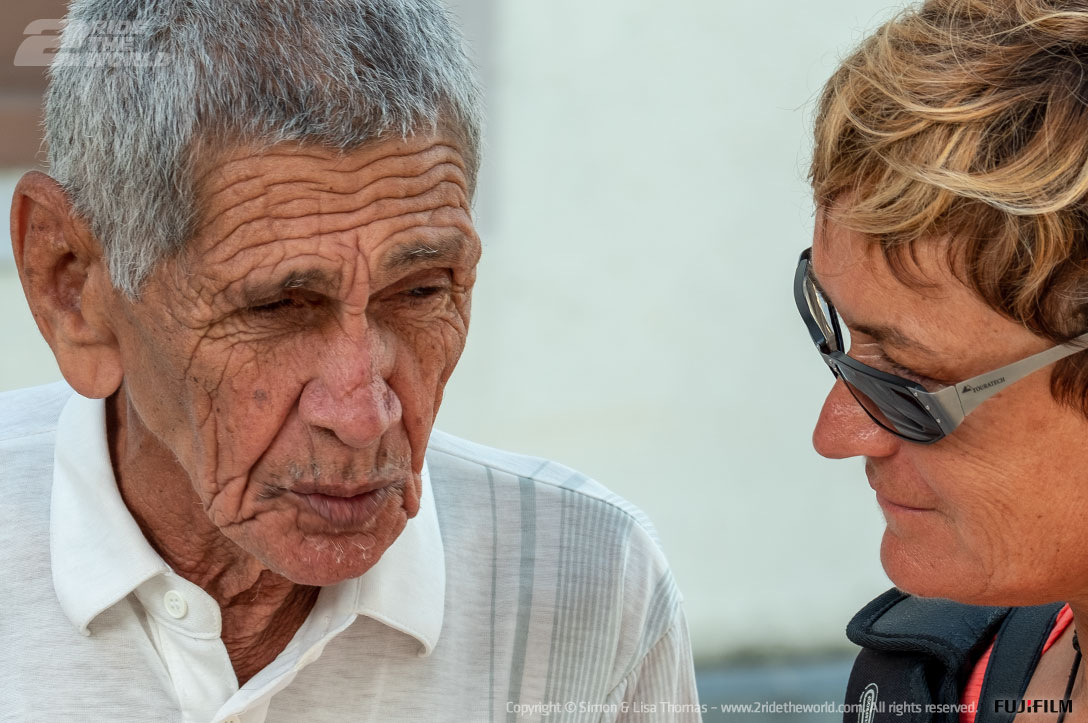 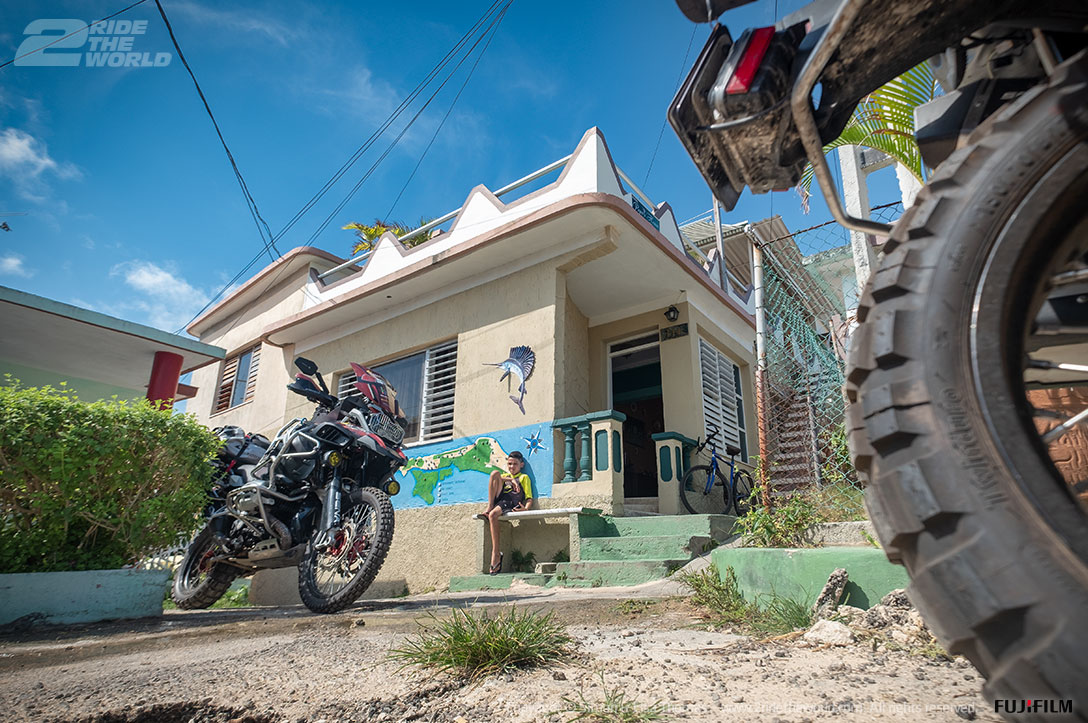 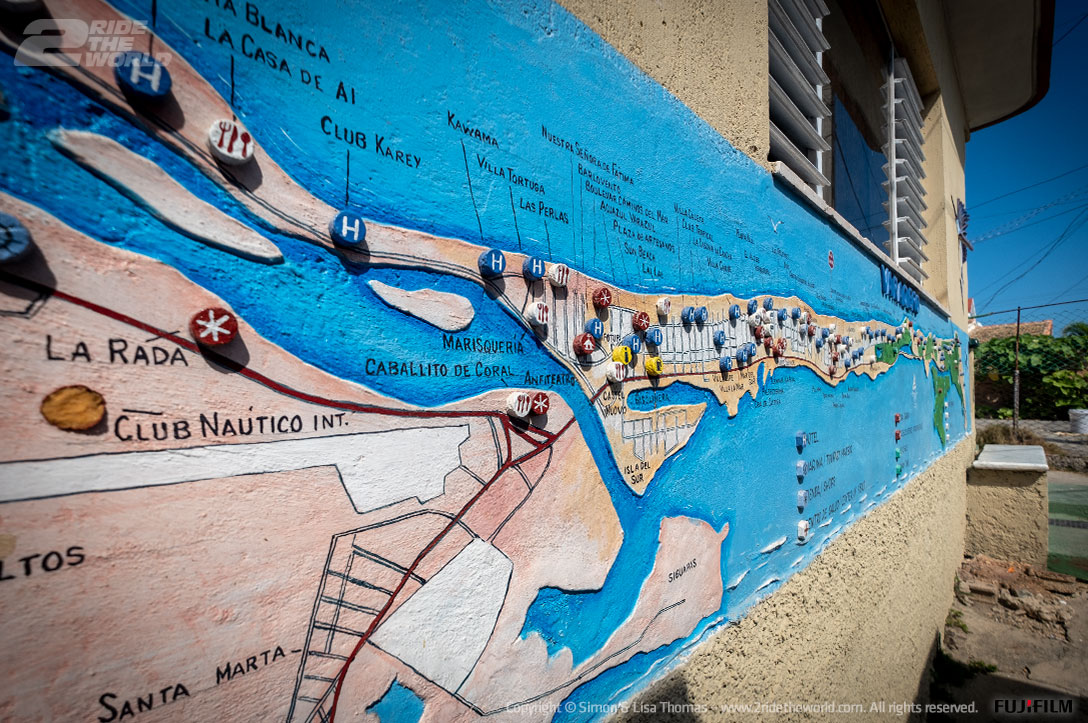 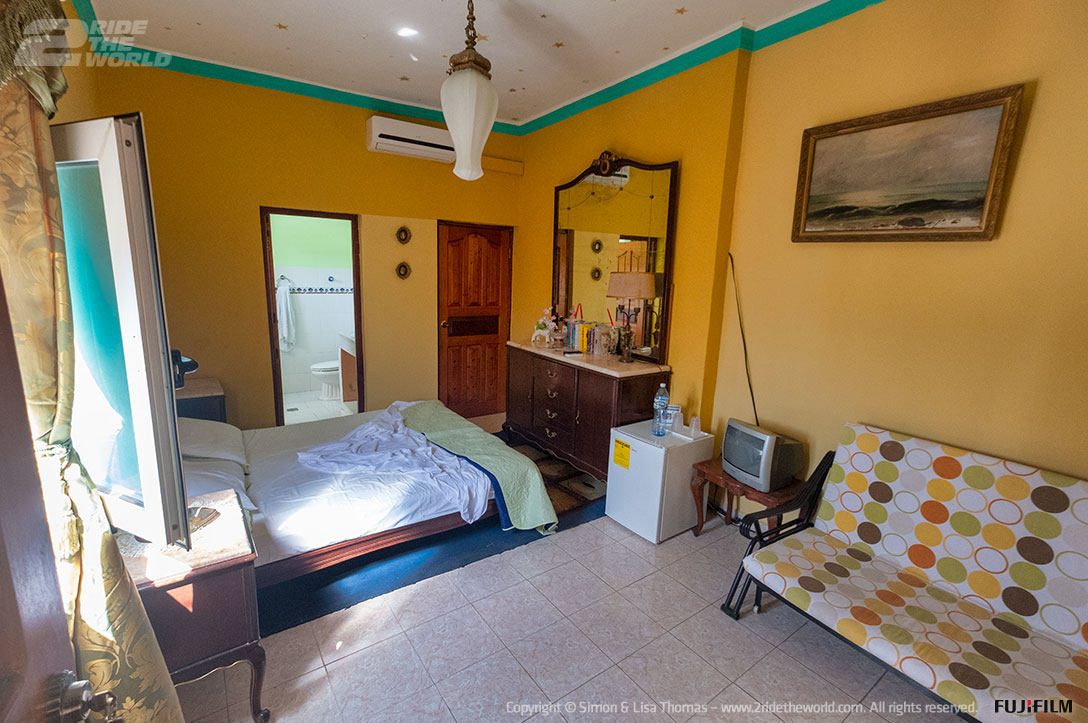 With the bikes parked up safely outside on the street, (the locals that had gathered assured us they would be safe for the night) we headed ten blocks up the main street to find our first Mojito. As the expression goes, you haven’t really arrived in Cuba until you’ve sipped your first Mojito. And if it isn’t an expression I’ve just made it one!

This area is teaming with tourists, every bar, restaurant and hotel is set up just for them. Its not what we were looking for but a couple of Mojitos in the air-con Beatles Bar just seemed too weird to pass up. It was odd sipping on Mojitos whilst listening to Yellow Submarine, with Germans laughing at the table next to us.

With our weirdness quota for the day filled we headed back towards the casa particular, we ducked under heavy green foliage and into a small dimly lit outdoor café, where we found two seats and waited to be served. Dinner was a local Cuban stew for $1 each including salad. Now, that’s more like it!