Our turn had come to leave Venice. We’d had a wonderful week with Caroline and M & M.

After a couple of strong coffees to kick start our day, we packed and hit the road without fuss. The GPS guided us easily through the mainland city and we were soon on the main A4 heading towards Padova. We’ve decided to head towards Milan, as this seems a good central base from which to get to any BMW dealer Maurico can find for us, with the parts for Lisa’s bike.

The day seemed to drag a little, as with like most motorways the A4 isn’t the most interesting of routes, however, our goal was to simply get across country as quickly as possible in case we get the call from Mondial Assistance.

We’d passed Verona by lunchtime (without spotting Juliet) and stayed on the A4 until we reached Bergamo when at last we could again have a little fun on the smaller roads. After a couple of brief stops to map check we had decided to aim for the town of Lecco just east of Lake Como. The SS639 provided us a welcome change of bends and twisty curves. After the monotony of the A4 it was heaven and by 7:30pm we had reached the outskirts of Lecco.

With the campsite easily found and our tent pitched next to the water we were wondering about food. Whilst we busied ourselves with ‘grub’ a small gathering had built around the bikes. Well, if nothing else the bikes are great icebreakers and conversation was soon centering around the machines and are travels. Two of the most interested were Alexander and Alexia (boyfriend and girlfriend).

We chatted with our new friends for about an hour until hunger and thirst finally got the better of us and we said our goodbyes. Within ten minutes Alexia had returned with her mother and several cans of beer. We thanked them profusely. Five minutes later Alexia’s mum was back again but this time with half a bottle of fabulous wine, brought, simply because the beer she’d brought earlier wasn’t cold. 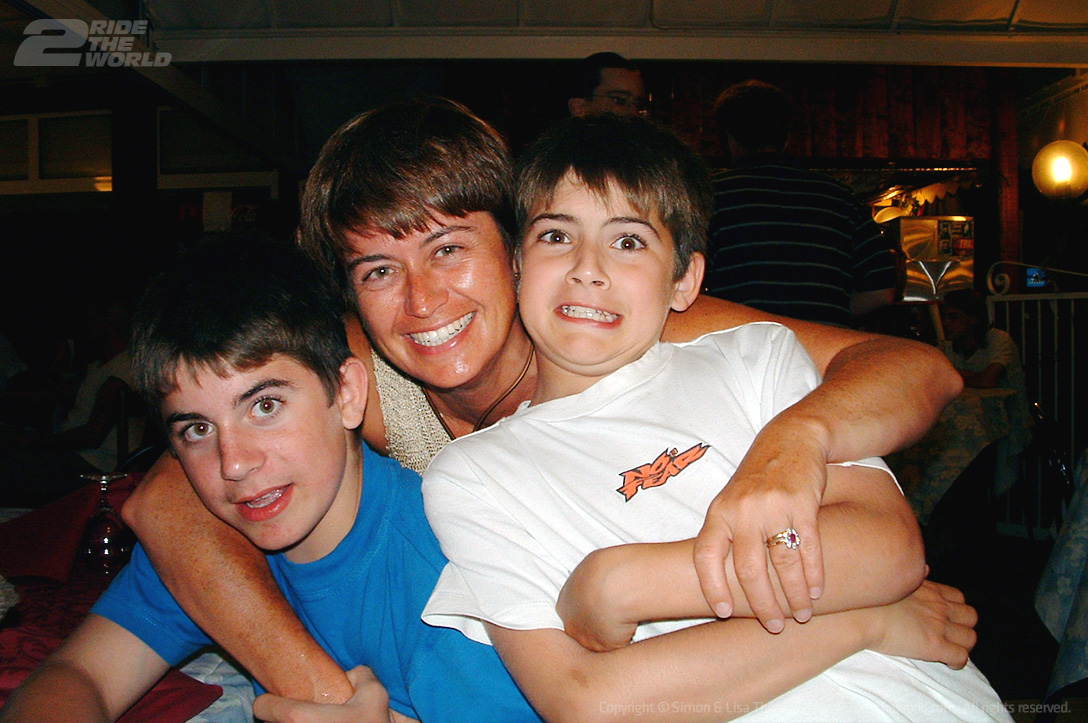 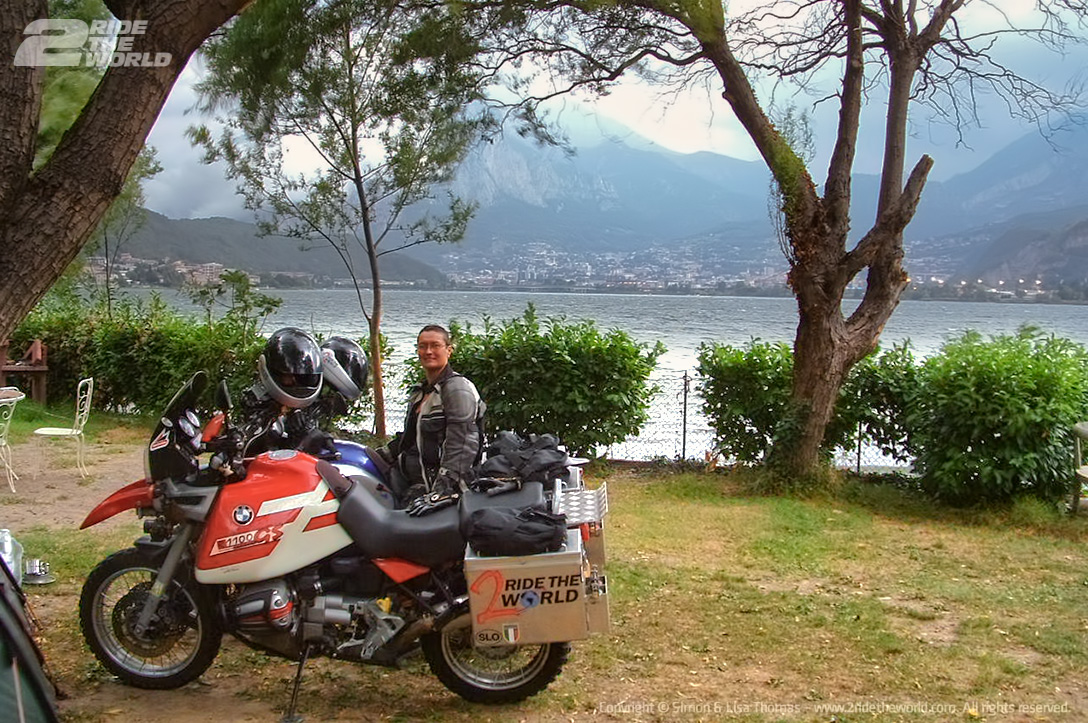 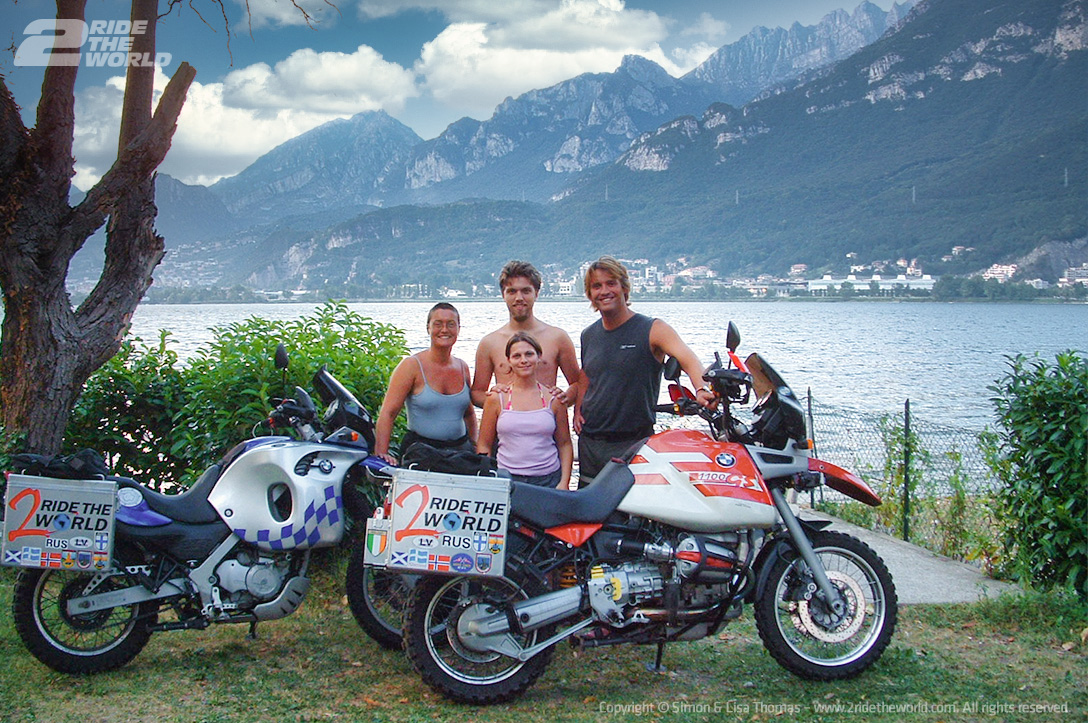 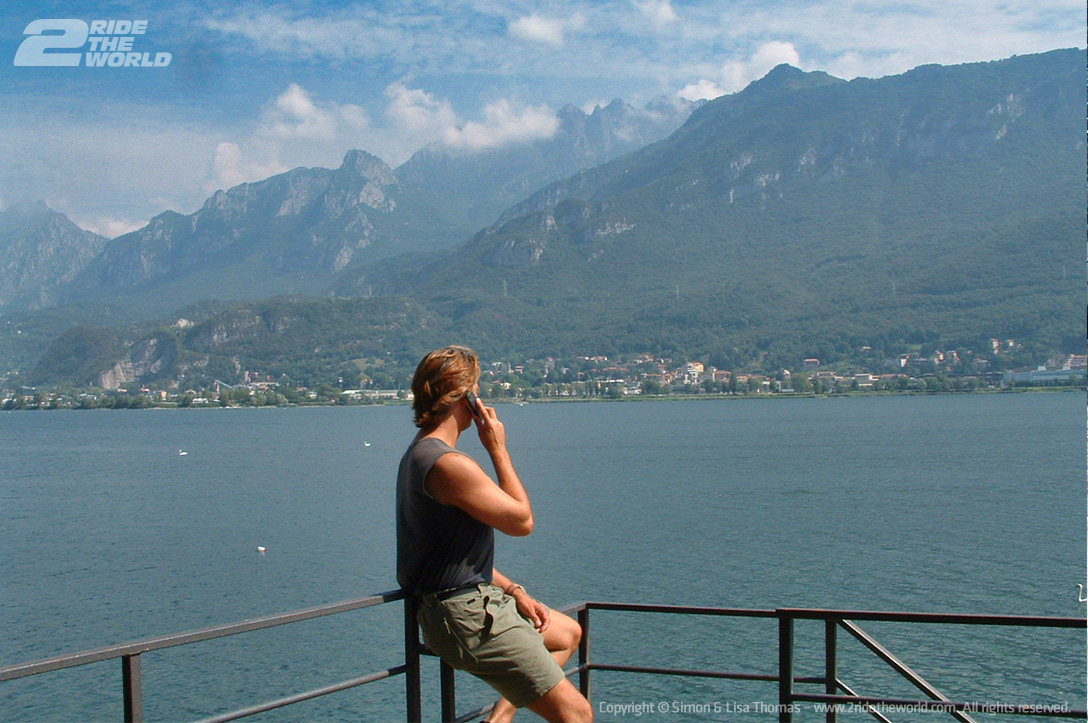 OK right, well that’s the drink sorted but we were still a little short on grub. After a brief scout round on the bike while Lisa sorted the tent I’d found the local Pizzeria, unfortunately the kitchen was shut. Purely by chance the owner (and chef) was a BMW fan with his new and very shiny R1150RT parked outside, with the right compliments paid, he kindly agreed to open up the kitchen and knock us up some spaghetti cabonera. This was then balanced on the back of the 1100GS as I very carefully road back to the campsite. Tired and very relaxed we ate and talked into the night as we watched storm clouds roll down from the mountain. We’re in for a big storm.

To our surprise we awoke to sunshine. The storm had not delivered the cooler weather we’d predicted.

The area is spectacular with mountains on three sides and the Lake of Lecco directly ahead of us. We finally received the call from Maurico around 1pm and it was good news, he’d found a dealer (who wasn’t on holiday) who could get the parts in and fit them straight away. Even better it had been agreed that the work would be done under warranty. Note: BMW supply all new UK bikes with a two-year warranty, this warranty isn’t recognized by most European dealers who still sell new machines with only 1-year cover. 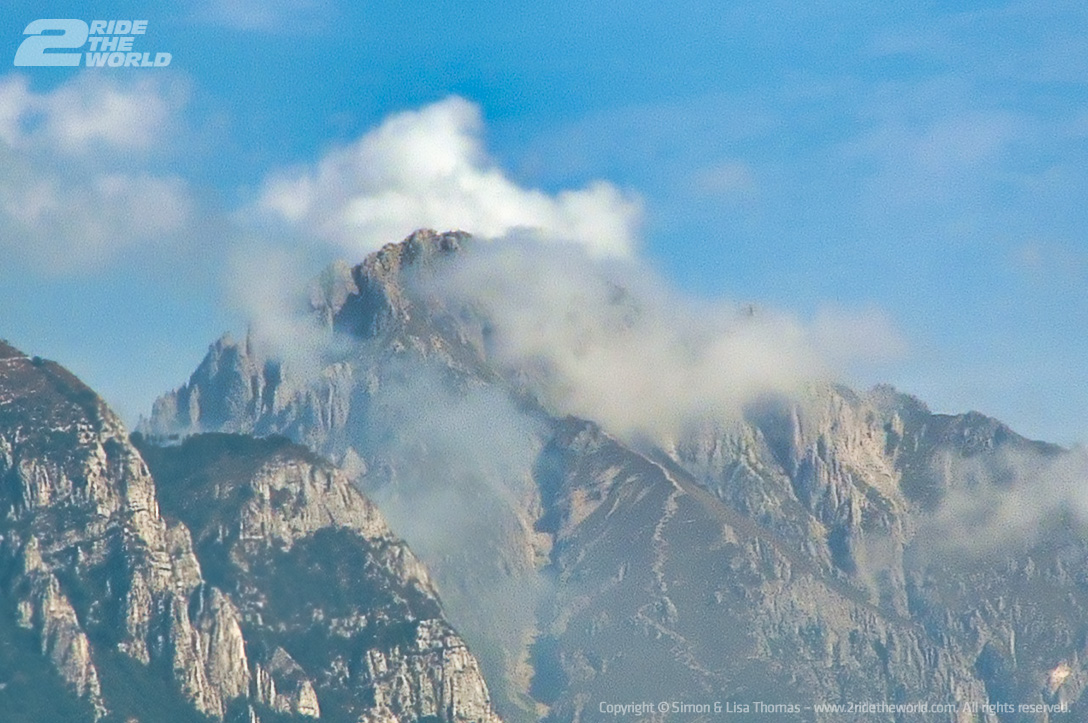 The alarm went early and by 7:30am we were up and sorting things out ready to ride into Milan. With the Milan map loaded onto the GPS we’d planned to be at the dealer by 9am. You’ll notice the use of the word ‘planned’

By 9pm we were in the area were the GPS told us we’d find the dealer, we’d already been here 40 minutes and were getting dizzy from circling round and around trying to find them.

Following a call to Mondial we were told we’d been given the wrong address and the right address was in fact the centre of Milan and not in the Eastern suburbs, we’d gotten to know so well.

We were off again. By 11:00 we’d found ‘Carzeta’ the BMW dealer in Milan we’d been searching for, thank god! The Milan traffic had been bloody awful and you need a PHD to understand the road system. Helmets and gloves off we headed for the main office where a smart and very well dressed Milanese gentleman informed us that “no, no!!! you’re bikes do not come ‘ere…beccauuuuusssse we ‘ave no moto workers for La moto, e so you ‘ave to go tooooo de ‘odder Carzete and ‘ere You’a will’a’ find the garage”

In the immortal words of Vinny Jones, “you’re ‘avin a bleedin’ laugh”. The idea of climbing back on the bikes and trying to now get to the other side of Milan was not a good one. Lisa was not a happy bunny.

With our concerns explained it was decided that we’d follow one of their staff on his scooter to the other Carzeta site. We set off following the scooter at a reasonable distance, that didn’t last long as this guy was quick. He was like Speedy Gonzalez but actually on speed. We somehow survived and reach Carzeta II 20 minutes later. 45 minutes after that and we were still having problems as no one knew anything about Lisa’s bike or the parts which had been ordered.

It transpired that Maurico had been talking to a manager at the first Carzeta and unfortunately he was on holiday today and had not informed anyone else about the conversation and subsequent arrangements. Just for good measure no one could get hold of Maurico as he was having a day off. Aaaahhhhhhhh!!!! It felt like a bloody conspiracy. 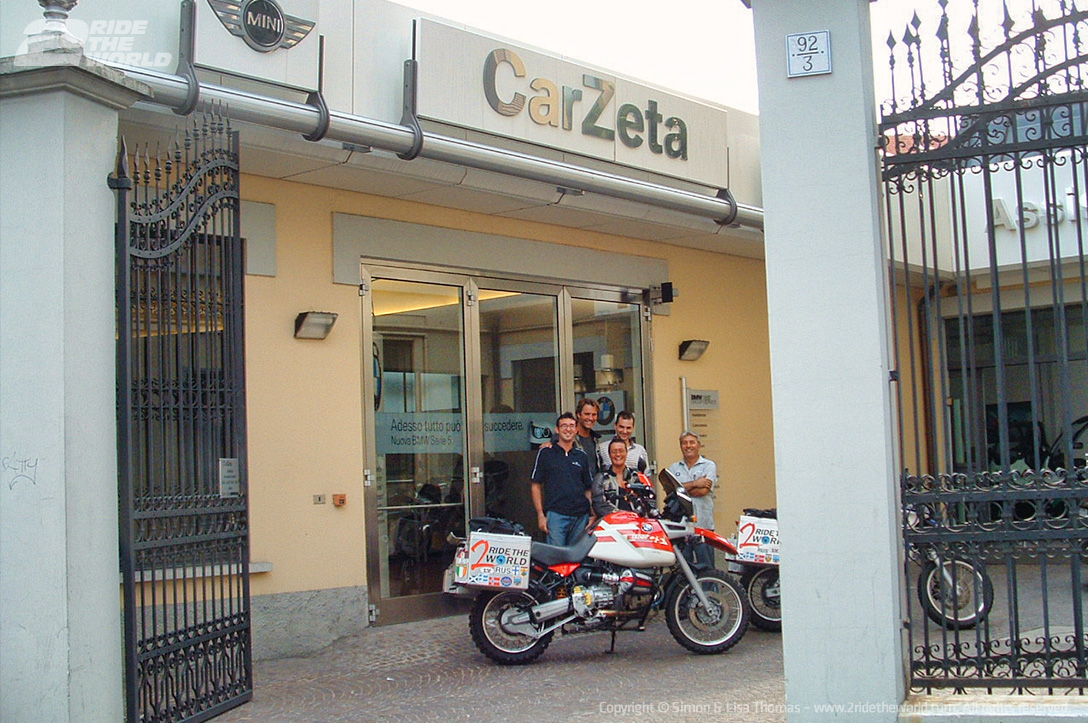 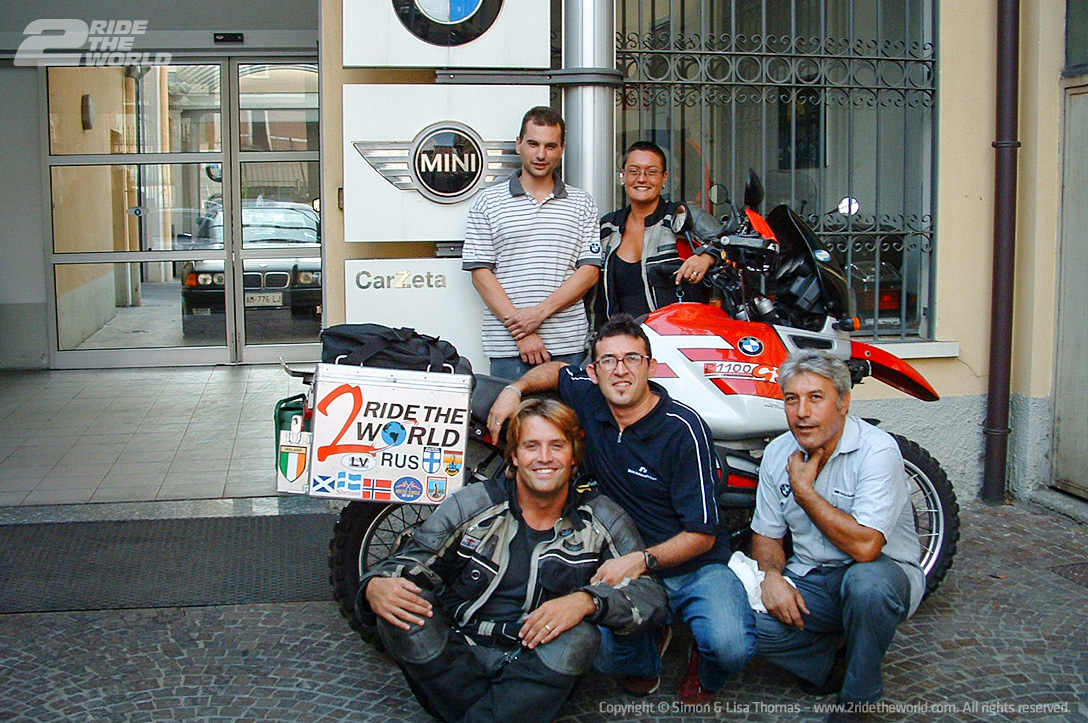 All was not lost , Carzeta turned out to be stars. With our difficulties explained and understood by their after sales manager it decided that, although no work could be carried out today, as they were fully booked, they would look at Lisa’s bike after closing, order the parts tomorrow and fit them the following day. The relief we felt was tangible. With a clear plan agreed, we said our thank yous and made our way out of Milan.