Friday 15th was a holiday day (Assumption) in Vienna and so the day was spent quietly in the garden with some of Briquettes work friends whilst having a BBQ and us sorting out our kit in readiness for leaving tomorrow. We have had such an enjoyable time here in Vienna – it will be strange to leave and be just the two of us again – and strange to be on the road again. It will also be difficult to say goodbye to friends who have been so supportive and in whose company we’ve enjoyed so much.
Saturday morning came round all two quickly and we were packed and ready to go earlier than normal. Christian, Bridget, Robert and Uschi had arrived to see us off and take us to the motorway. With the bikes laden up we had one small call to make before we got on the road to our journey to Italy. We had promised Johann at BP that we would bring the bikes around loaded up to enable both him (BP) and ourselves to get some shots of us all together. Johann happily greeted us as he had done each morning and after introducing us to his wife, who had come in specially, we were off outside snapping away with the bikes happily posed underneath the large BP sign. 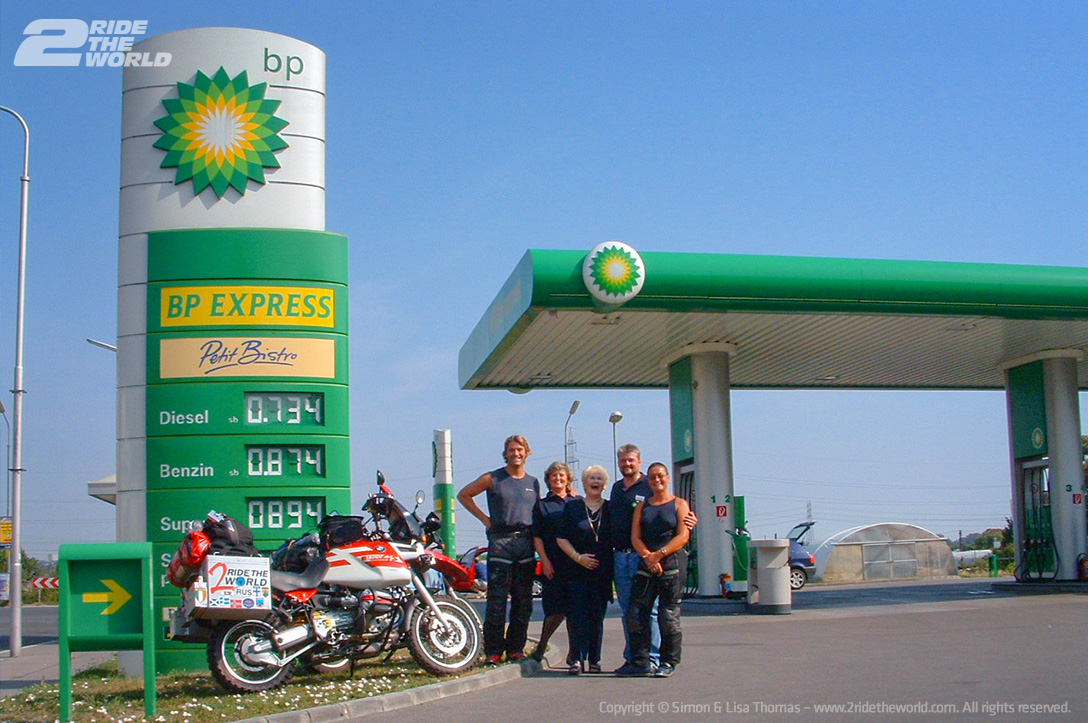 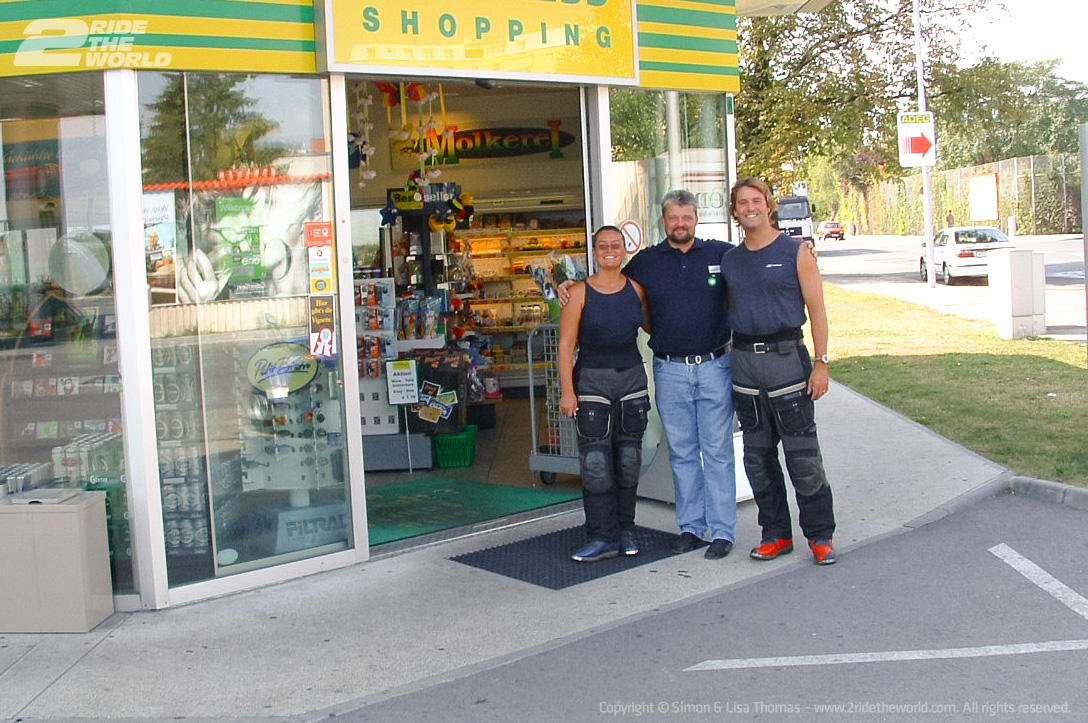 With the pictures taken our appreciation once again conveyed, we were off, but not alone. Robert, in his car, and Chris and Briquette on his GS accompanied us as far as the motorway. We were both a little relived that we could put off the forthcoming difficult goodbye for just a little while longer. At the services we stopped, the time had arrived to say our final goodbyes. So, with a few tears shed and promises to stay in touch made, we climbed on board our heavy machines, kicked up the side stands, slipped the clutch and made our way out onto the busy autostrada. We were on our own again.
Prior to heading towards Slovenia we had an appointment with Hein Gericke in Graz. For the past week we had been organising where to pick up the silver, roll-top 70 litre bags that Hein Gericke were donating to our trip. We had tried to get these before we had left but everywhere had run out of supply in the UK and in Germany – very popular it seems! Now – with the help of Jo (HG UK) we were able to pick up two bags that had been reserved for us in Graz. With the aid of GPS, which took us straight to their door without a single wrong turning (!,), we arrived at 1pm an hour before they were due to close. During our short time there we were looked after by Bridgette and picked up our long awaited bags with glee whilst trying not to spend money in their fantastic new and shiny store! We were both in our element but managed to curb the need to purchase shiny new things! 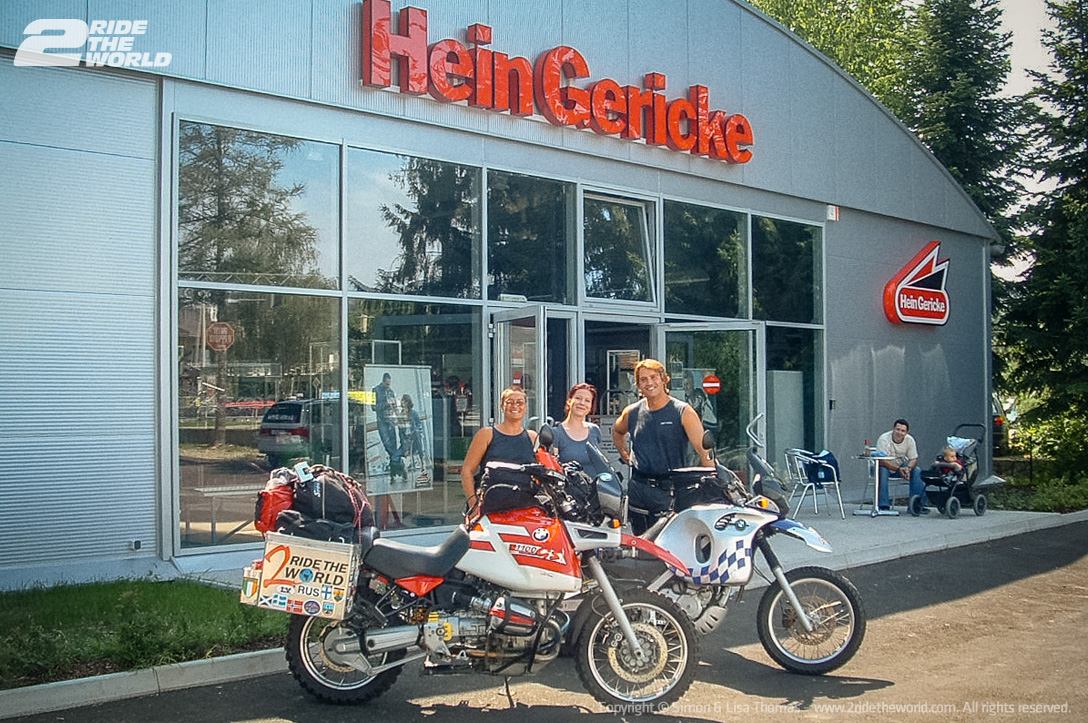 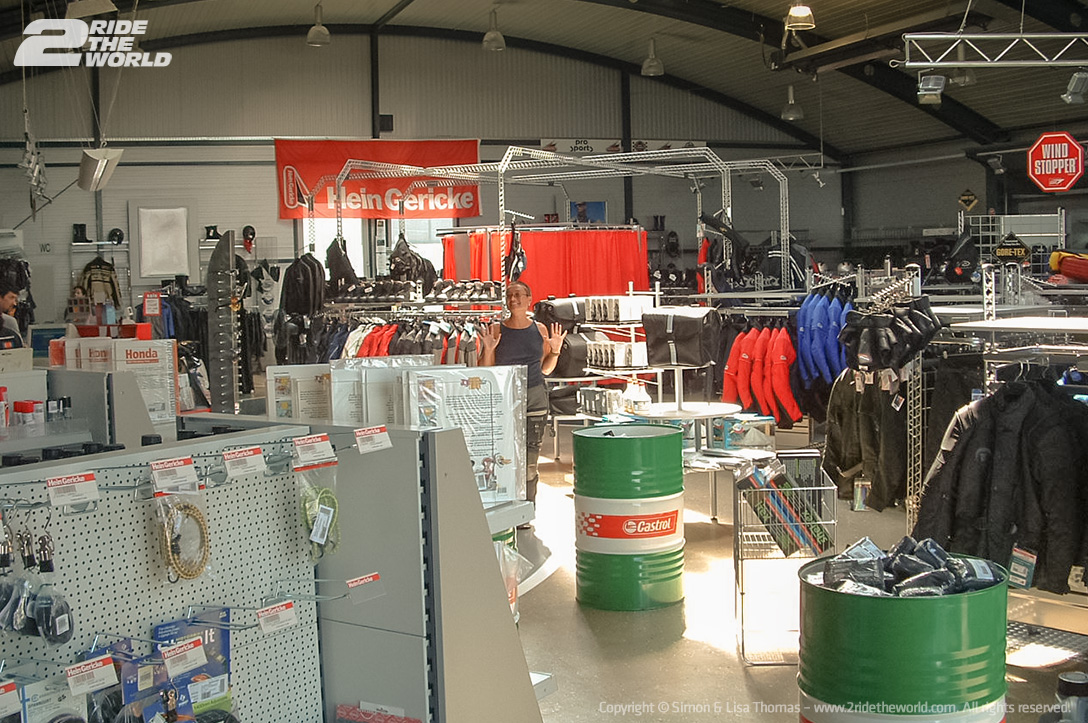 From Graz we decided to head towards Slovenia a country we know little about, with it being so close it seemed silly not to enjoy a few roads in another country. After cruising along a beautiful riverside road (the route 1 from Maribor running West back towards the Austrian border and a small town called Dravograd) which carved its way through a lush green valley - we made our way back into Austria aiming to find a campsite for the night. Slovenia didn’t seem to have any sites marked and we needed to fill up with fuel so decided that we would pop back into Austria and use the rest of our BP vouchers. 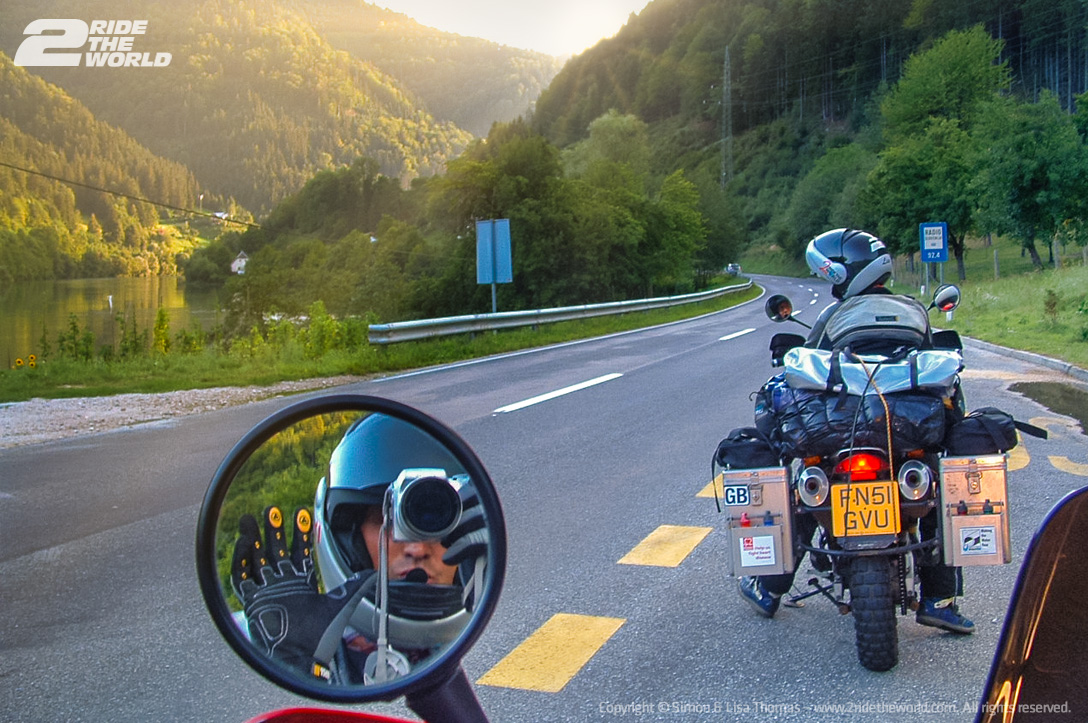 From Dravograd in Slovenia we rode on road 81 towards Bleiburg– gorgeous mountains, with the largest being Hochpetzen at 2113 metres, overlooking this whole area. Unfortunately we could see the weather changing fast, it wasn’t hard to work out that something big was brewing upstairs – we needed to find a campsite fast in order to save getting drenched whilst putting up the tent! In the very small town of St Michael we found a camping sign but were amazed when we reached the site to find a huge holiday campsite for, what mostly seemed to be Austrians – www.petzen.net - it was also VERY expensive at almost £20 for the night. However, we needed to stop and just managed to pitch the tent and get everything away before the heavens opened. A huge electrical storm circled for hours. Gales, lashing rain, sheet and fork lightening all came crashing down!