After Thursday being so exciting, today and the last few days have been days of R&R - research and rest!

Spending about 4-hours a day in the Internet café we tried to catch up on the research we needed to do prior to reacning and riding through North Africa, and there is still such a lot that we need to do; sort out spares, new tyres, research routes and obtain all the up to date information on the borders we will have to cross, and check if there are any more countries that are now closed!

Luckily in the next week, we have our friends Moises and Hannah visiting family in Gibraltar and they are bringing out all our African books and maps for us – so research is a must prior to getting these.

Unfortunately over the last few days Lisa began to feel very ‘off colour’ and has spent the last 3-days mostly in bed in the tent!!
On the up side we do have some great new neighbours. Nick and Ash turned up two nights ago in their Range Rover Discovery and looked very much at home almost immediately. This pair of globetrotters are currently travelling and taking time out whilst deciding where to settle down. Having both grown up in South Africa they now have a base in Bath, what a small world it is. We’ve already swapped stories not to mention learnt a great deal from them both as only a couple of years ago they had organised an expedition and travelled through central Africa by bicycle. 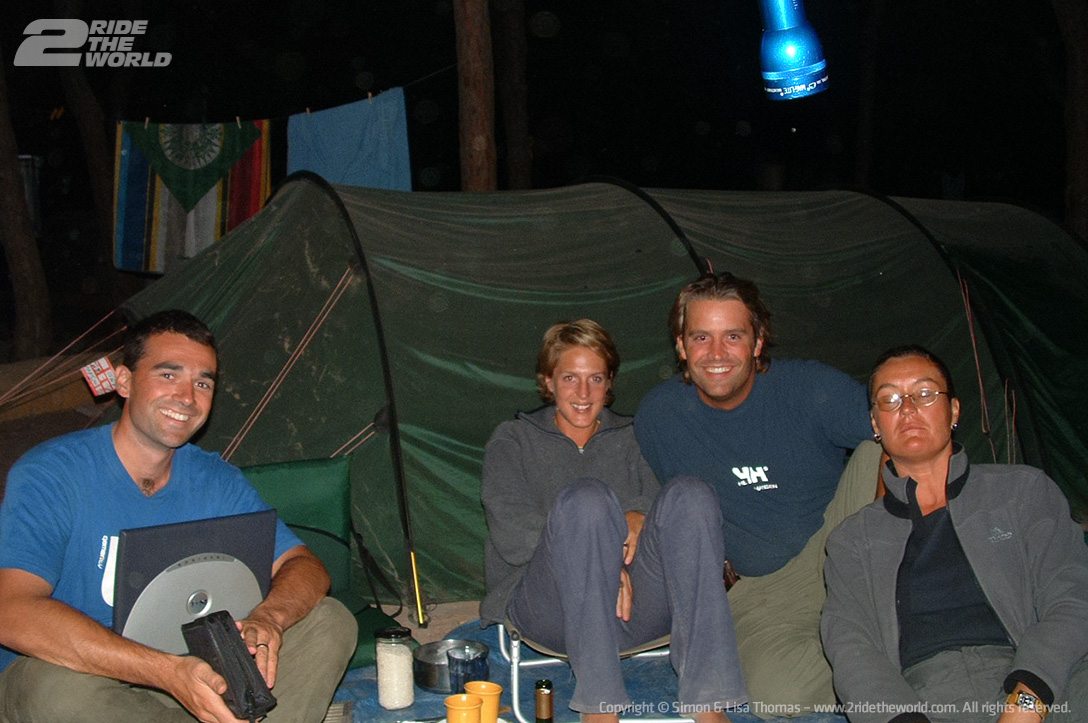 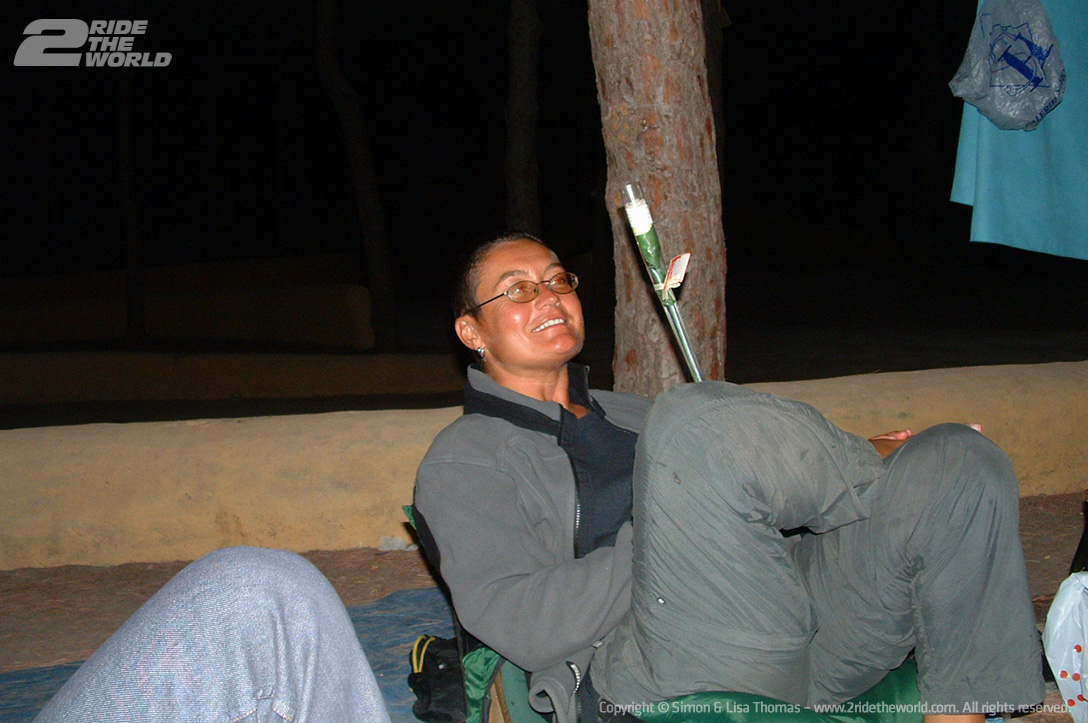 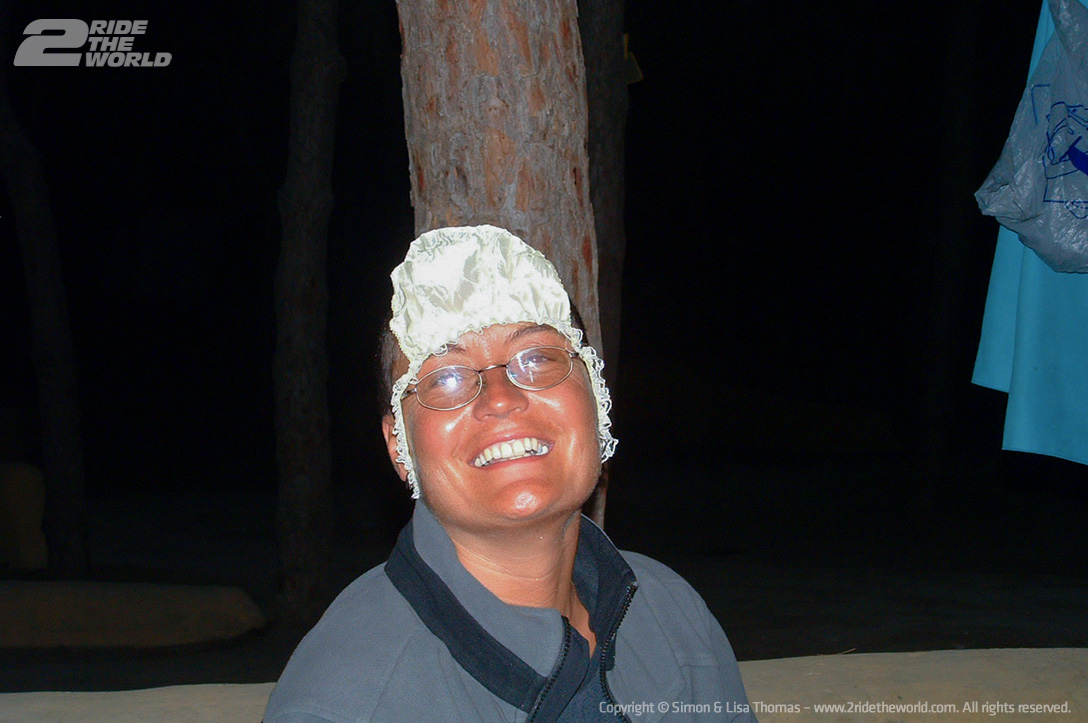 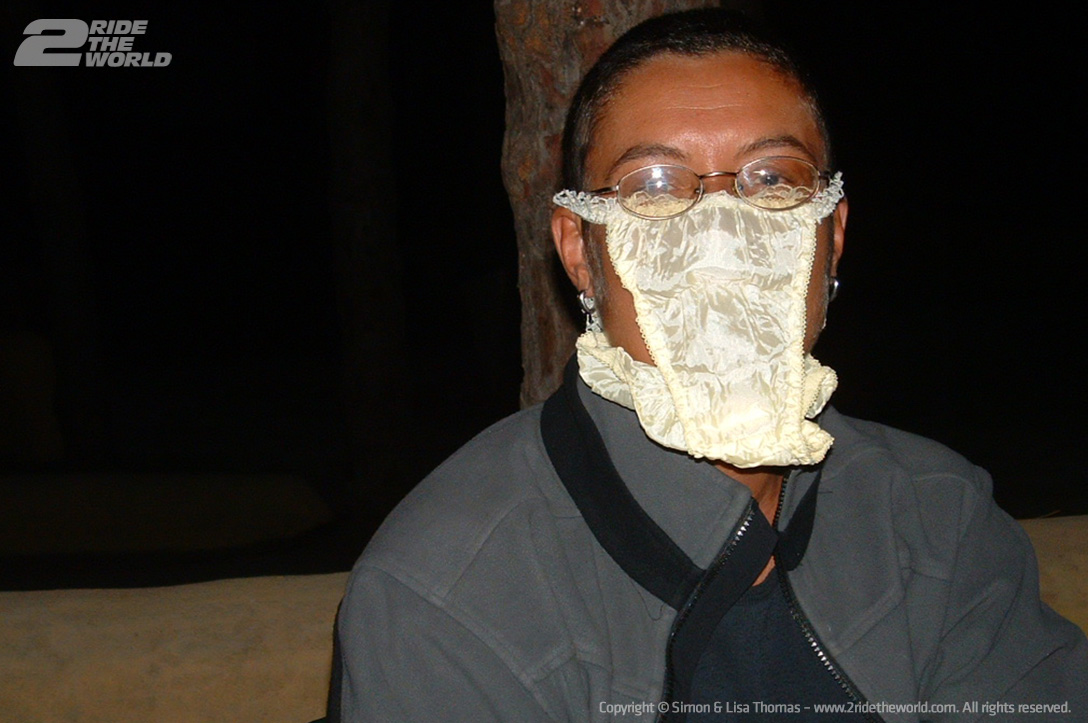 Our time with Nick and Ash has been great. Lisa and Ash have got on famously, whilst Nick and I play ‘adventure’ boules, a game invented by us!

Much like normal boules, you throw the large silver balls towards a small wooden jack, only our version included throws of 30-feet plus, up and down sandy banks, behind trees or just simply with the jack out of sight! Much more fun! Nick seemed to be just a bit too expert at this whole game – we suspect a misspent childhood.

With the weather being rather non-descript we’ve also taken the opportunity to take stock of our bikes and equipment in an attempt to get rid of surplus kit and weight. With our kit laid out on the ground there is a strange sense of reassurance we both feel in being able to quantify our lives so simply. There is a strange sense of empowerment in being able to see in one snapshot your belongings and your responsibilities, besides it makes a good photo for the website. 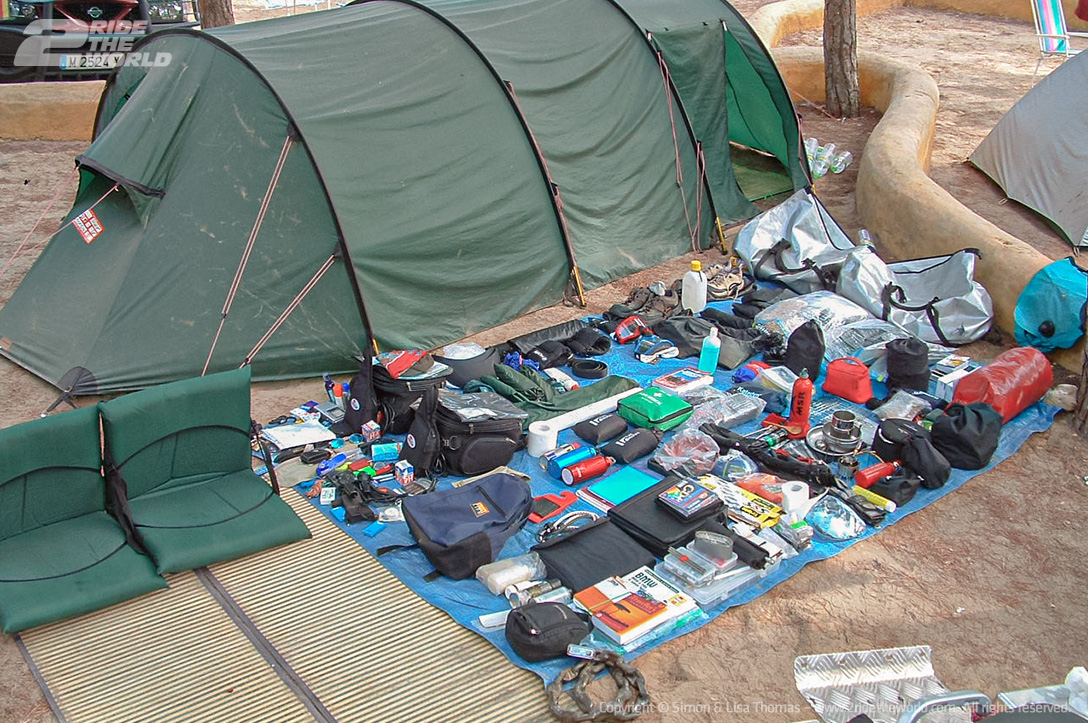 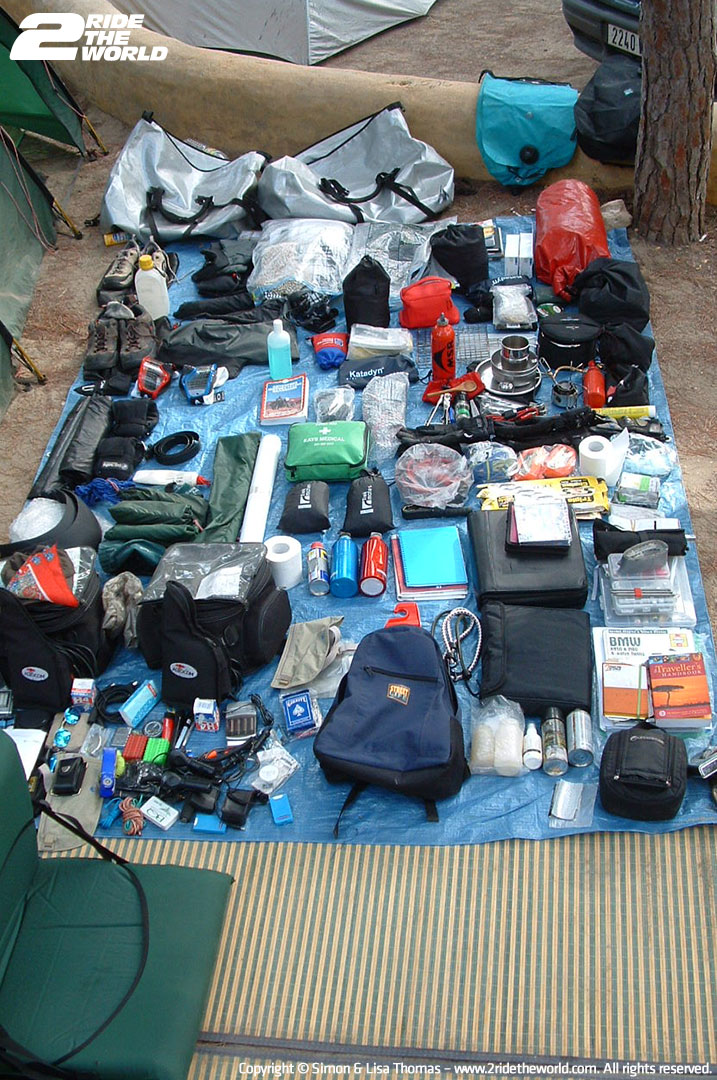 With Lisa still feeling a little fragile we decided that we must move closer to Algeciras and also Hannah and Moises had already arrived in Gibraltar and were spending a few days with their family prior to us meeting them. Taking the Atlantic Coastal Route down the N 430 we passed stretches of wild untouched coastline, white beaches and fishing villages – we arrived in Tarifa at a very reasonable hour and set up camp.

Initially our time in Tarifa passed very slowly. The weather has taken a real turn for the worse, with sheets of rain pounding our canvas!! The initial novelty of rain was quickly washed away as everything hangs damp and festering and mud becomes a problem. The cooler climate has also dampened spirits in the campsite and it’s at times like these without the ‘glossy sheen of atmosphere’ when living under canvas can suddenly seem less appealing and a little more like hard work.

We have spent the last few days in Tarifa once again going to the Internet café, doing research and starting to re-read the sections in the Chris Scott's books and frightening ourselves half to death. Do we really want to go into Africa? – it all sounds so dangerous!!
During this time we were so looking forward to seeing Hannah and Moises who have already been in Gibraltar for a few days. They have lots of stuff for us – maps, books, and tent parts!

Our spirits were lifted on Thursday as we rode the bikes into Gibraltar to be met by Moises and Hannah excitedly waving at the border crossing. Following our friends to a large Citroen dealership run by Moises’ cousin it was not long before our bikes were parked, helmets were removed and proper hellos could be made. It was now time to catch up and a full cooked English breakfast at the Clipper Pub seemed like the right thing to do. 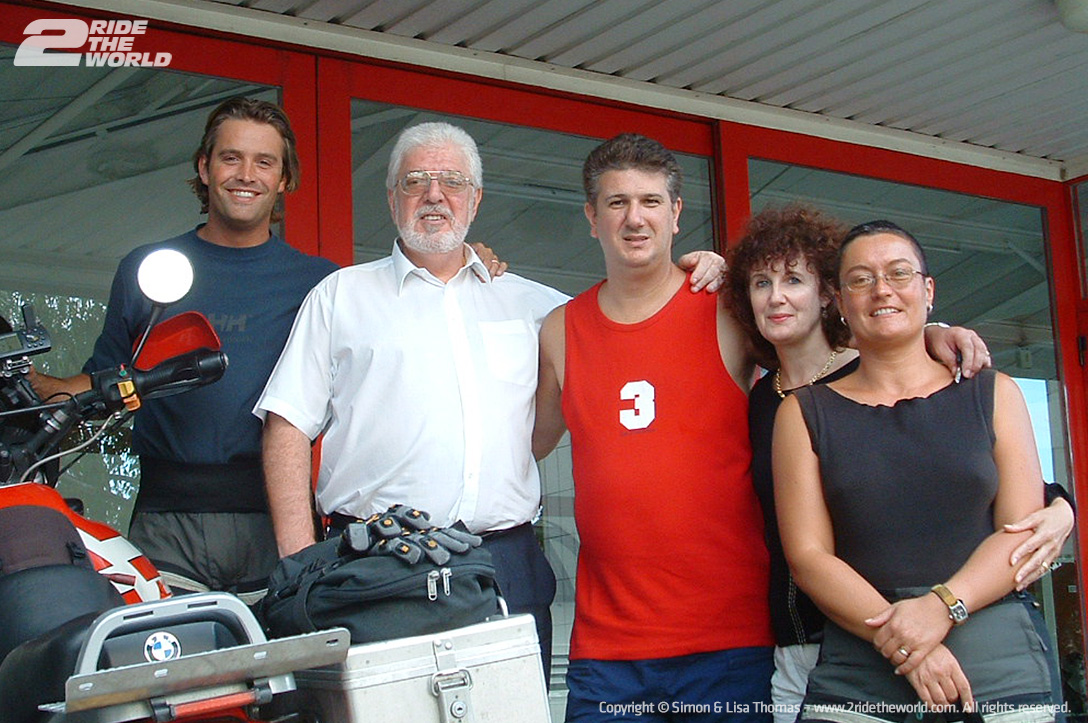 Our waitress came to the table and happily asked in a Northern twang “Right luvs wot can I get fur yers”. With the atmosphere, decoration and menu, we were instantly transported back to the UK and were quite comforted suddenly realising that language barriers and making ourselves understood weren’t going to play a part in this meal.

Runny fried eggs, crisp fried bread, fatty and frazzled strips of bacon accompanied singed tomatoes and a healthy dollop of baked beans. At this moment we were confronted with a meal ‘fit for a King’ and the enjoyment we had in savouring familiar tastes I think surprised us both. Conversation between myself (Simon) and Moises took off at their usual pace with bizarre conversational tangents the norm. With Moises being one of my oldest friends I don’t get away with much. Real English tea served in oversize mugs washed down the remnants; the rain outside just didn’t seem to matter. 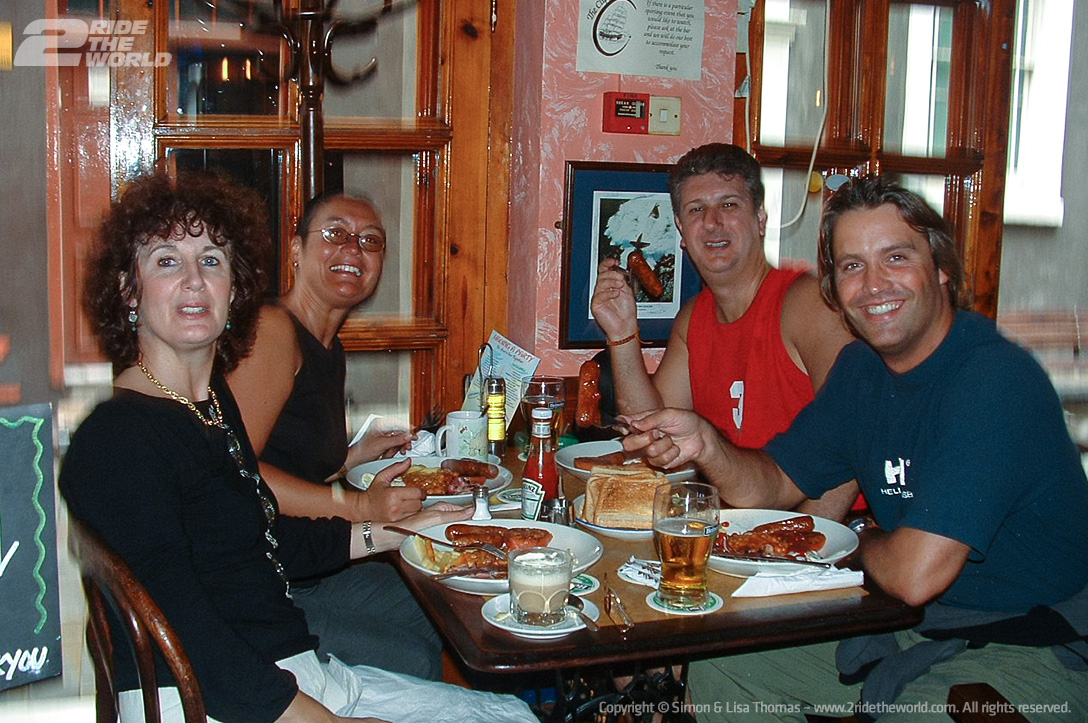 Our High street walk took us past a plethora of shops, selling everything from cheap booze to state of the art electronics, ended in the square and gave us the first opportunity to look up at The Rock in the company of our friends. With the rain still beating we headed to one of the many bars and enjoyed another hour of conversation with a bottle of South African Shiraz.

With our own private tour of Gib well under way we headed off to meet Moises’s family. Maps, books and tent had all been looked after and sitting in their lounge it was like Christmas come early. To our amazement and delight the new flysheet we had expected to receive from Hilleberg the tent maker turned out to be a completely new tent, pegs, poles and all. 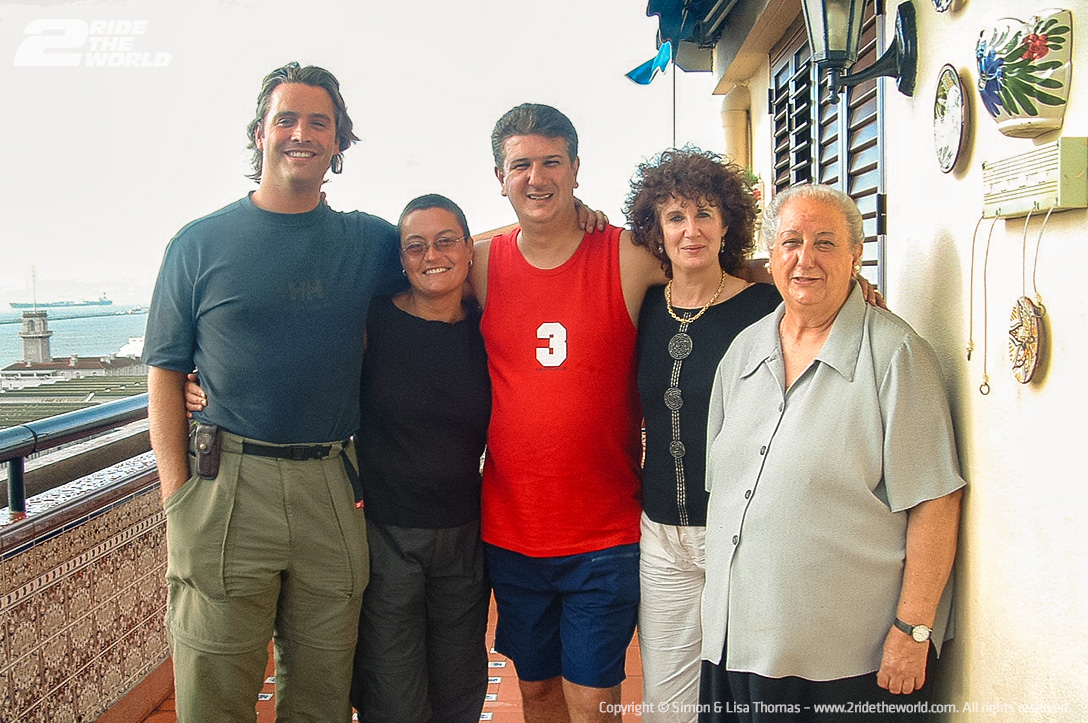 The weather was beginning to pick up outside so a photo opportunity was on the cards, the glorious view of the Gib harbour and Moroccan mountains in the back provided the perfect backdrop.

It was dark before we said goodbye to Moises and Hannah and after promising to ride safely for the thousandth time, we finally set off heading for the hills and the relentless rain. Our return to the tent was an anti-climax after such a good day with friends. Disappointment turned to dismay as we realized our tent was sitting in 3” inches of water. The next hour was spent getting absolutely soaked as we tried desperately to bail out the front awning, which was swimming. Everything in the front porch of tenet was soaked as we’d left the tank bags on the floor – they were just like basins!Incredibly the inside of our tent was absoluty dry, thank god.

As the rain got harder we frantically dug trenches in an attempt to get the water to drain. Lisa battled. She couldn’t see. The rain was so hard it was covering her glasses. When she took them off it was even worse! Finally and after digging the Spanish version of the Panama Canal the water finally began to subside. By now we were both drenched and past caring. It was an uncomfortable night without much sleep as although we were dry it was like sleping on a waterbed, weird!

Bleary eyed from a restless night the next day passed slowly and uneventfully.

We had promised to see Moises and Hannah today prior to their departure tomorrow night. With the rain for company we set off for Gibraltar. An hour later saw us warm and dry in Moises’s hire car hammering down the motorway singing (badly) songs from the 80’s and heading for Puerto Banus for a little shopping, sightseeing and maybe a little celebrity spotting. 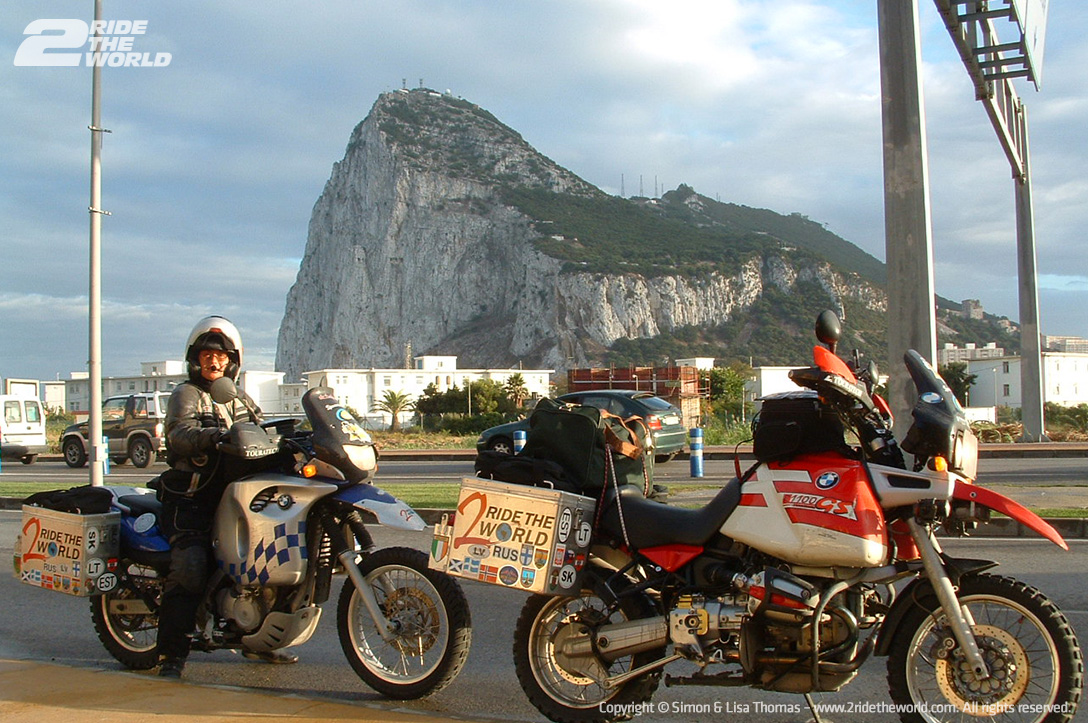 After browsing the massive shopping mall we had worked up an appetite. Following my conversation with my great friend Jacqui (back in the UK) a week earlier, and her deliberately enticing description of TGI Friday’s fantastic Jack Daniel Barbeque Ribs,well the TGI’s Restaurant near the harbour, simply had to be done.

“Would you like to see some menus” our waitress asked chirpily but unconvincingly. “Nope”, I quickly replied, “Jack Daniel Ribs, please”.

My mind had already been made. Lisa, Moises and Hannah followed suit. The waitress probably thought “sad English Bastards”. We didn’t care!

Part of really enjoying any travel is being able to appreciate people, and circumstance. During no part of our preparation for our ‘Global journey’ did we envision sitting in a TGI’s restaurant in Puerto Banus tucking into deliciously crunchy deep fried onion rings and savouring perfectly cooked baby back ribs smothered in mouth watering Jack Daniels sauce (bloody hell I should start writing menus ☺). If anyone from TGI’s would like to sponsor us, bank details can be provided).

Needless to say we devoured the lot and enjoyed every single mouthful. With stomachs obscenely full, we paid the bill and headed for the shops. Time fly’s when your having fun and all to soon it was time to make our way back to Gib, but not before spotting Leum Gallagher’s Ex, in her Saab leaving our car park. We couldn’t decide if she qualified as a celeb?