Not much to write really. The day didn’t start early, as sleep was a priority for some strange reason.

Chris dragged himself out of bed around mid morning and the rest of today has been spent catching up. All in all a pretty good day. Great to see Chris again, the farmhouse is progressing brilliantly. He’s done so much since we were last here.

Chris is a party animal. With the intention of getting an early night, we finally got to bed at 2am. Good conversation, cold beer and better red wine are one hell of a good reason to stay up. Needless to say we’re all feeling a little sensitive today. I’ve spent a couple of hours working on the diary and putting some pages together for the web site. 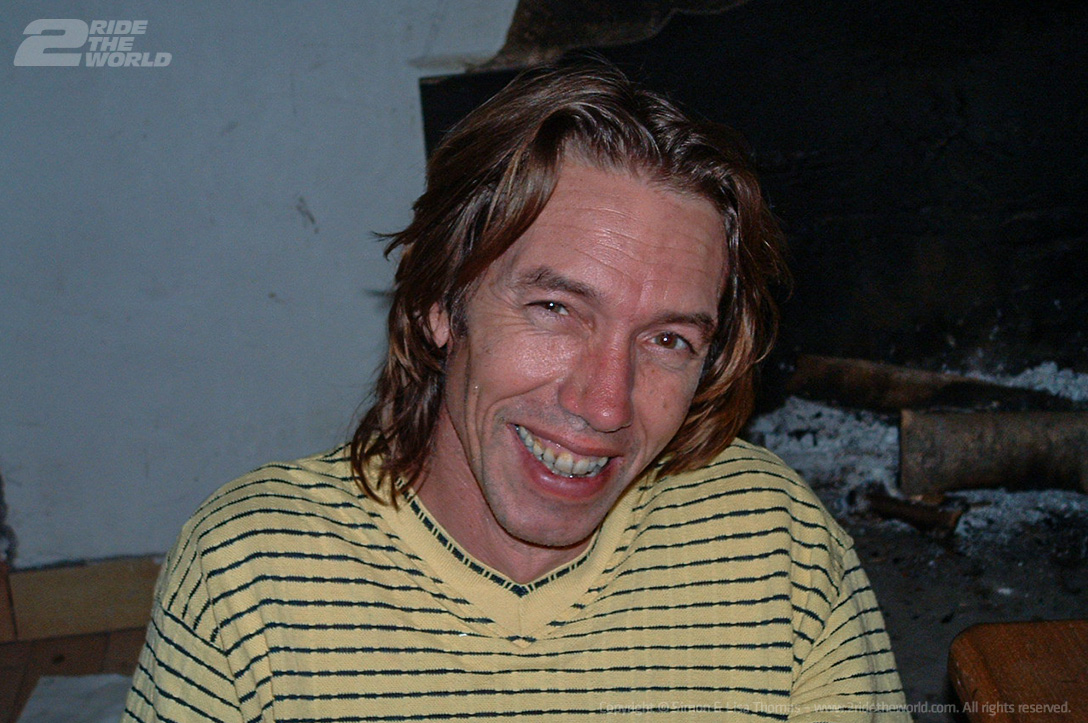 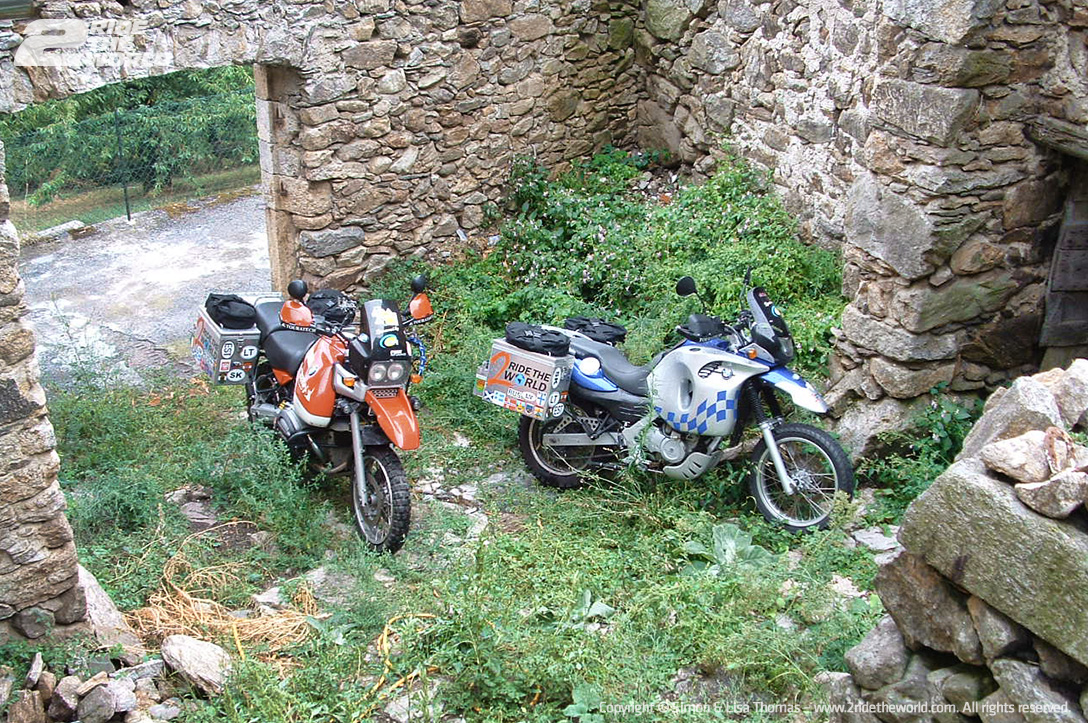 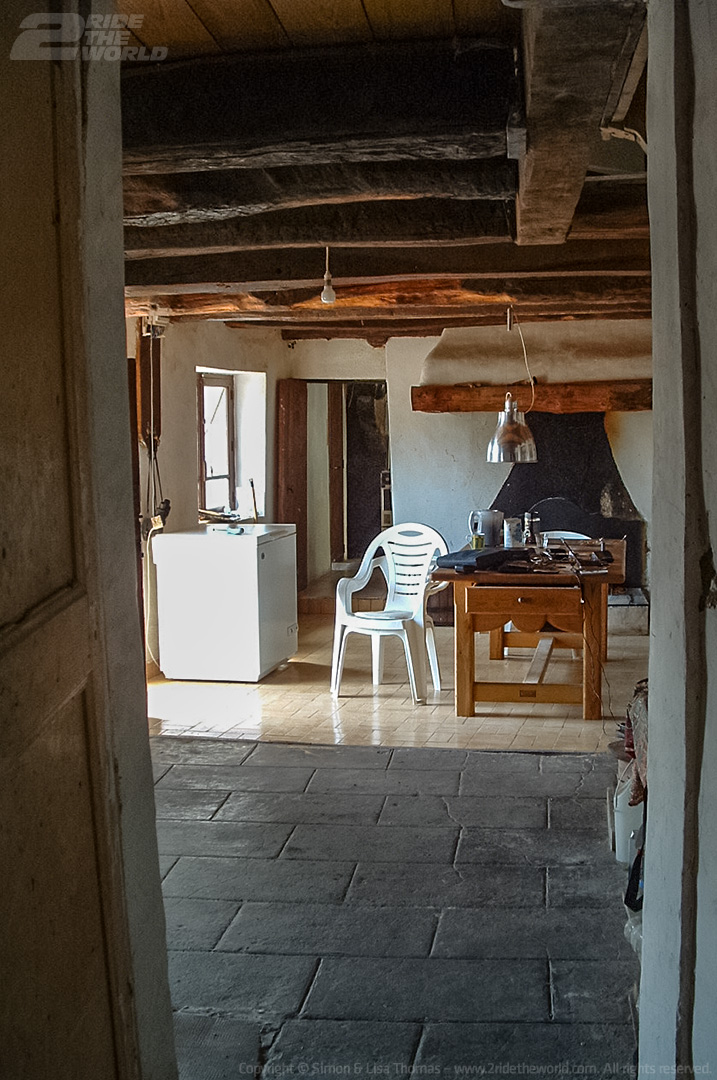 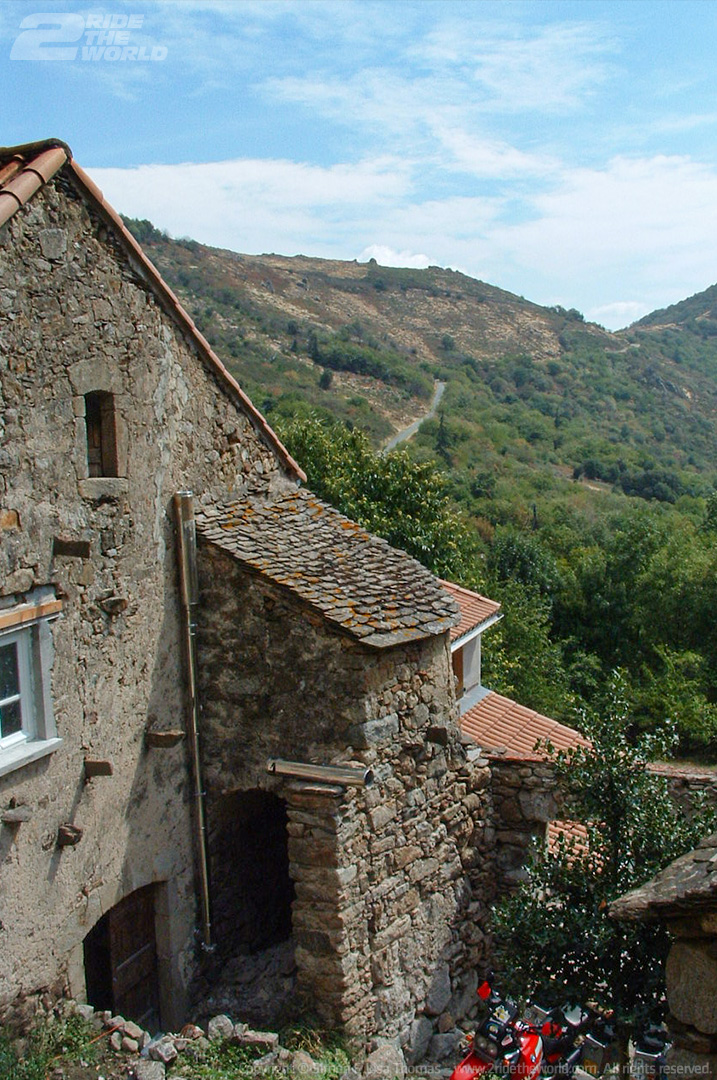 Diary and web pages were the order of the day today, with afternoon spent exploring some great trails around the forests of Chris’s home. Lisa and I both thought that getting some more off-road practice was a good idea. Once again the bikes felt so different with all the weight and luggage removed.

By 4pm we were both tired and dirty so headed back to Chris’s.

“Do you fancy going out tonight”? Chris asked eagerly, on our return. It was clear he was up for a party again.

Rejanne was a friend of Chris’s who bought a restaurant down at one of the local campsites. The season was coming to an end and it was time for her and her staff to let their hair down. Chris and his two guests had been invited. Food was sorted; all we had to bring was ourselves and a few bottles of wine. 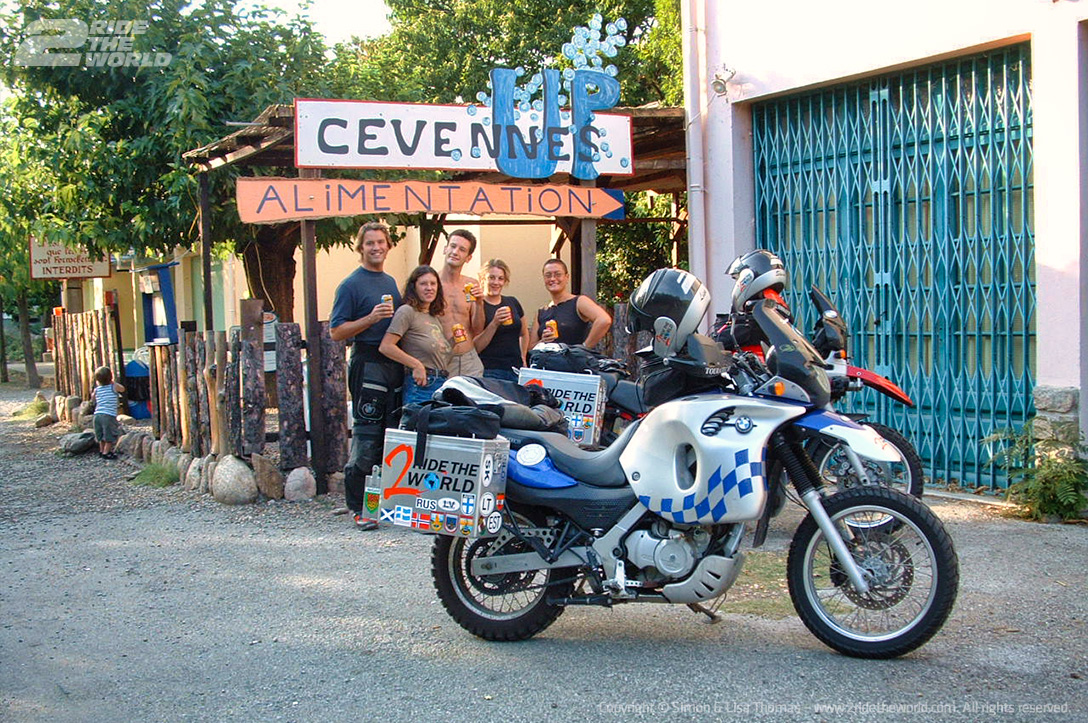 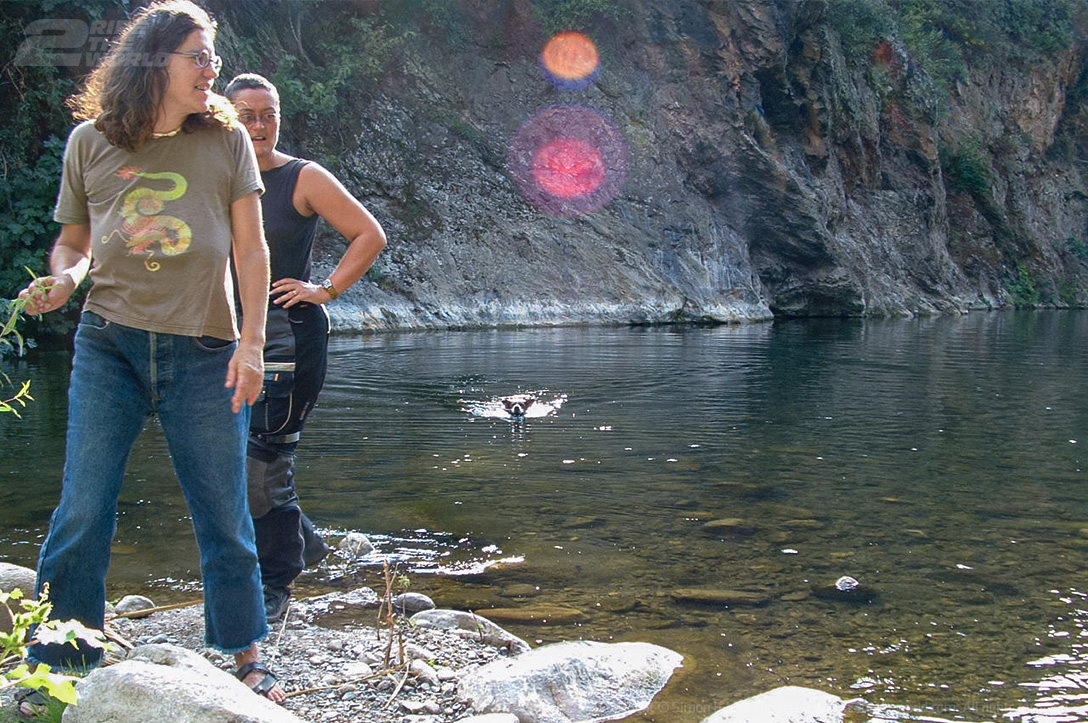 We pitched up with Chris in his Cherokee Jeep, it still felt strange to be in a car, and handed over the wine and exchanged a thousand kisses.

OK, OK, a little exaggeration but I lost count. Anyway I’ve always been a little confused with the whole French kissing protocol (no not that type of French kissing). Do you kiss once, twice or three times? Does once mean, hi I like you but not that much? Does two kisses mean, hi I really like you but I can’t go for the third ‘cos you’ve got really bad halitosis breath and does three mean, I really, really, like you and I could carry on kissing you all night but people will begin to talk?

I was simply working on the premise that you carry on kissing until the other person stops. Of course this plan does backfire if the person you’re kissing is doing the same?! luckily for me everyone else seemed to understand the rules and I managed not to offend anyone plus - I’m still married.

The evening was great fun and the company relaxed. By 11pm the evening was beginning to hot up, with instruments brought out and vocal cords stretched. We were in for another late night.
We finally headed back up the mountain at 2:30am. This time I was behind the wheel. Nothing like driving up a steep mountain pass in the dark in a car you don’t know to wake you up!

Monday has swung round and – ‘Yes’ – we are still here!

We had had every intention of leaving on the Thursday, however…Chris was having his first house party. The party had been in the planning for a week and Chris had been asking us to stay for the last few days, as much for moral support than anything else.

To our surprise our laid-back and very cool friend was actually nervous – and was very keen for everything to go with a ‘bang’. With the three of us allocated jobs, which ranged from picking up more chairs and scrounging enough cutlery, the daylight hours saw a hive of activity. Builder’s dust brushed away, timber planks stored (bearing in mind Chris’s house is a work in progress) and copious bottles of booze, brought up from the valley, just in time for the first guests to arrive.

Chris began to relax and conversation flowed as easily as the wine. The evening was a success from the word ‘go’.

For us, our only concern had been the language barrier and quite frankly….it wasn’t! All of Chris’s guests were characters in their own right – and brought no pretense or ‘hidden agenda’ to the table – they were here just to enjoy a great evening and each others company and once again we felt very honoured to have been accepted into this close-knit group of friends so warmly.

At some point in the early hours of the morning the table was cleared, moved to one side, music turned up and dancing commenced! Fred was on form and determined to dance with everybody and anybody! The Chris and Fred dance was particularly scary and we hope will NOT be re-enacted within living memory!!

By 4am guests were beginning to disappear, Chris had been taken to bed (to sleep we hasten to add!) leaving only three gyrating, drunken people, which were myself, Lisa and Fred. Lisa disappeared at 6am, I followed suit at 7am and left ‘Billy No Mates’ Fred dancing with himself. Some people have more stamina than is good for them.

Eyelids were finally peeled open at around 2pm and an hour later animation was once again brought to lifeless limbs! Cofffeeeeeee…..cofffeeeeee. Needless to say the rest of the day was simply spent surviving the aftermath and recovering slowly.