Give Me My Child

Our last day on the beach. With snorkelling kit and dinghy packed we all headed down to the sand to take up our regular positions. I had a few calls to make to try and sort out the dodgy bearings on Lisa’s F650GS, which we’d discovered in Moscow.

Shouldn’t be a problem I thought, BMW have loads of dealers in and around Venice. How wrong could I have been.

Dealers were either on holiday or for some reason had a real problem coming to terms with the fact that we knew exactly the parts (and part numbers) which needed to be replaced, and that all we needed was for them to order them and fit them ASAP.

After speaking to five dealers I was starting to get really pissed off, especially as my mobile phone bill was going through the roof. Finally I found a garage that could get the parts in but he wouldn’t order the parts until he’d inspected the bike for himself, this would of course take time and so made nonsense of me calling ahead in the first place.

In desperation I called ‘Mondial Assistance’ (a service offered by BMW to help riders abroad). I explained the situation to Mondial and again they seemed to have a real problem with what I actually wanted to accomplish. A long conversation with Maurico, an Italian-speaking operator finally gave me hope, as he understood what we needed. He has promised to call around dealers, get me a provisional delivery date and a time to take the F650 to the dealer.

Great! It had only taken most of the morning. I spent a lot of the afternoon trying to shake of my frustration. Cold beer and sun are a wonderful therapy.

After a little more time on the beach it was time for Caroline and the boys to get packed up and ready to leave. The time has flown; it only seems like yesterday they arrived.

Caroline had worked out with incredible accuracy the best way to get to the airport using the water taxis. Things didn’t quite go to plan!

We boarded our usual Vaproretto to Piazza San Marco and disembarked at the first stop where we planned to wait with Caroline until she picked up her next connection. 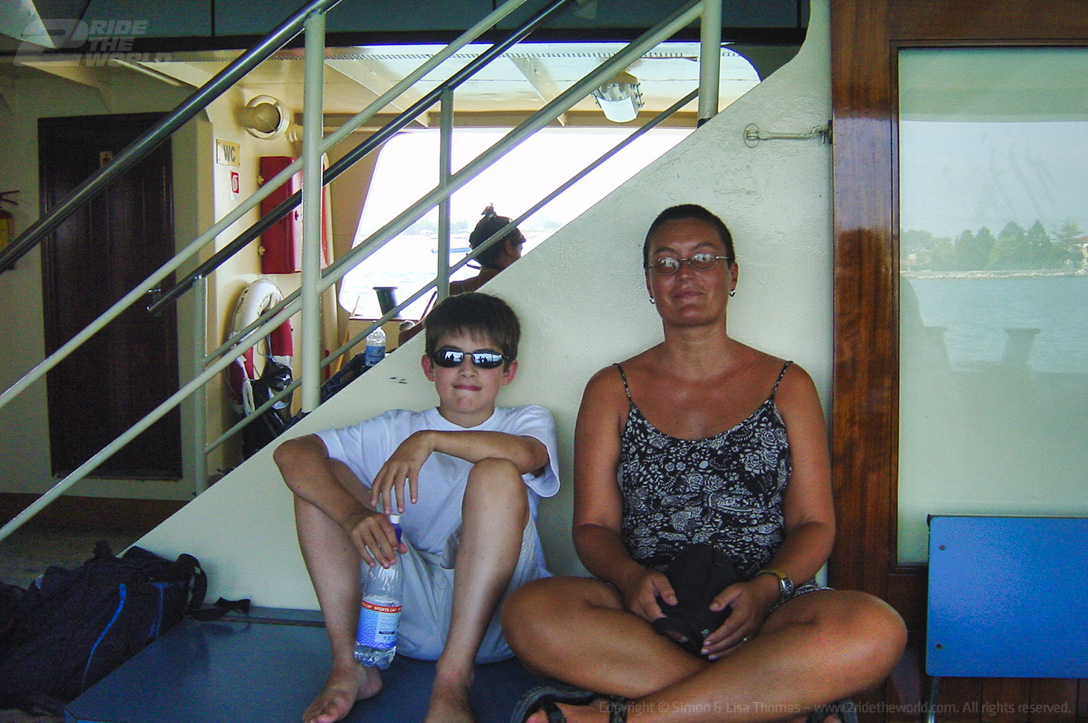 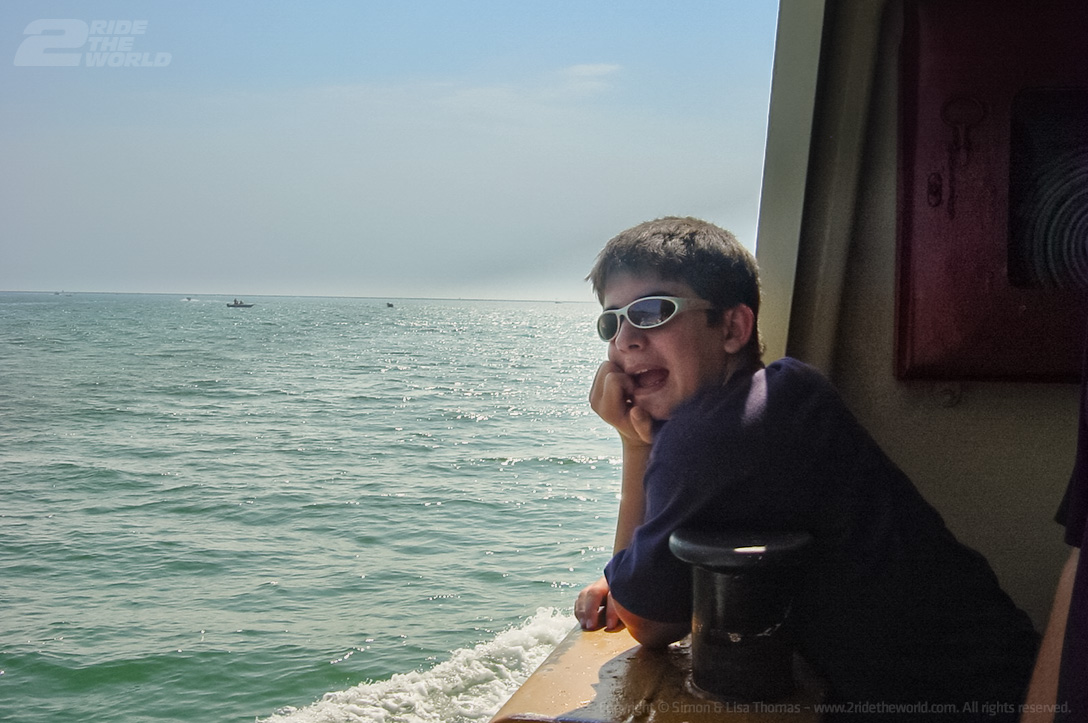 Goodbye kisses exchanged and having checked the boat at the dock was the right one, Caroline and the boys’ boarded and quickly got themselves seated. I waited while Lisa waived her final farewells to her big sister, but was becoming rather disturbed to notice that everyone else with a suitcase and bags was still on dock.

My guess was these lot are also heading to the airport…oh shit! “Lisa they’re on the wrong boat” I shouted as loud as I could. The heavy steel doors of the boat were already being closed. Lisa urgently conveyed a message to Caroline, who in turn quickly had the worst confirmed. At this point the boat hadn’t left the dockside even though the waist high doors were closed. Caroline quickly explained she needed to disembark or miss her flight.

The boys and belongings were gathered but the doorman seemed completely immune to Caroline’s pleading for them to open the doors. Instead they simply shrugged they’re shoulders and told her it was too late. The mooring ropes were now being untied. It’s important to add, the guys who Caroline was pleading with were untying them. It would have taken nothing for them to simply pull back one door and let Caroline and the boys off.

Caroline wasn’t standing for this shit. “C’mon boys we’re getting off” she shouted. The boat was by now pulling away from dock! Faster than… a very, very fast thing. Caroline by now had thrown her rucksack off the boat to the dockside and in spite of the best efforts of the ‘door guys’ she’d followed suit, practically hurdling the boat doors in one go. Max rather unimpressed with the whole thing, very coolly hurled his bag over and jumped.

Whilst all of this was going on, Lisa had gone on board to help with bag finding but was now stuck as the boat pulled away. Miles was getting upset as he’d yet to disembark and mum and big brother were off.

With one rope still attached the boat was going nowhere as Caroline had bravely attached herself to it. The doors guys were still intending to sail away. Between the shouting and yelling of the boat crew came the stern voice of Caroline in full flow…”Give me my child! You aren’t going anywhere until I have my son”. She wasn’t bluffing. My now I’d joined the dockside and was trying to calm down a tense but stupid situation. Finally the boat pulled back up Miles and Lisa got off and the ‘dumb ass’ door guys shouted they’re very best insults. Well, never a dull moment.

This situation wasn’t because of a language problem but simply sheer disinterest to help by the door guys. Ignorant assholes’…that’s why they’re door guys I guess. A short while later and with Caroline and the boys on the right boat, we said goodbye again. This time without a hiccup.