ZEGA Pro Panniers...Lisa and I get asked more about our pannier/luggage choices
probably more than any other piece of kit we use. So here’s some answers as to why we
chose ZEGA panniers originally and why after all the years and the miles
we’re still using them today.” Simon Thomas, 2 Ride The World

Our first decision though was simply whether we should run with soft or hard luggage. Sure, soft luggage weighs less but we realized that the security and strength advantages of a ‘hard-luggage’ system outweighed the disadvantages, sorry for the pun.

Our initial criteria was simple enough, we wanted strong panniers that could be locked to protect our gear and that were waterproof. After exploring the world for over a decade our criteria and our expectations have grown and other considerations have also come into play. 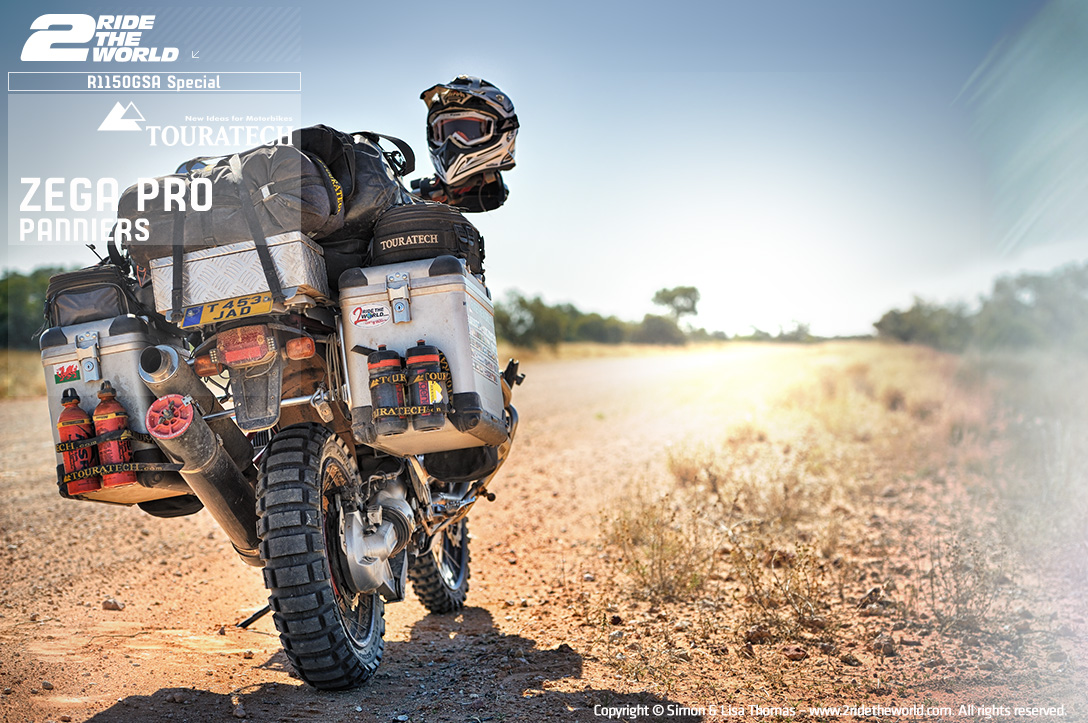 One substantial and obvious benefit of the aluminum panniers is being able to stow and lock your gear and being able to walk away from your bike. We lock as much as we can inside our Zega’s; basically anything we can’t afford to loose. Although you can lock the panniers with padlocks we chose to buy the integral Touratech locks and then made sure to have them all keyed alike, so that one key opens them all. We’ve also made sure any other Touratech locks we’ve used have the same key number for example the lock on the GPS clamp, the lock on the oil filler cap, etc. This one little tip makes life so much simpler.

ZEGA from the start

We’ve been using Touratech’s ZEGA pannier system since 2001 and believe me, we’ve thrown every kind of abuse imaginable at them and they are still going strong. 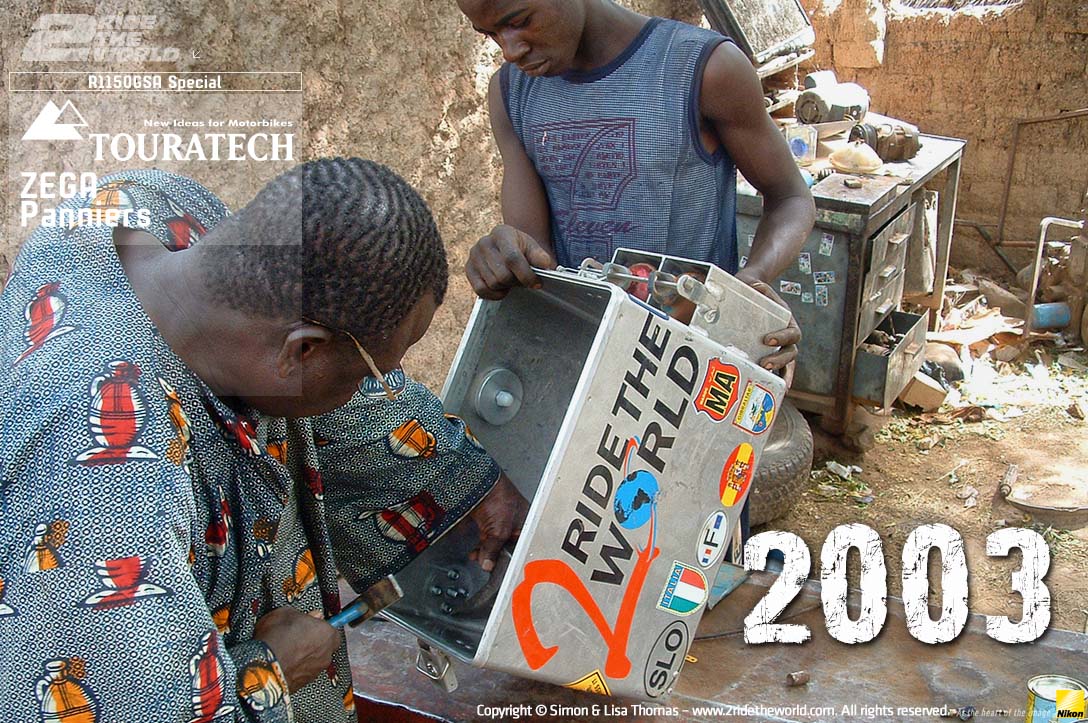 Are these the strongest panniers on the market? NO!

One of the design strengths of the ZEGA system is lack of unbreakable rigidity. Sound odd? Let me explain...when your bike falls, especially at slow speed, the bike hitting the ground creates a lot of energy that has to go somewhere. If the panniers and pannier frames are inherently rigid (super tough) then that energy has to go somewhere and unfortunately that somewhere all too often is your bikes sub-frame. I know for sure that If something has to bend, then I’d rather it be a flexible piece of pannier aluminum than the frame of my bike. On the occasion my panniers have buckled, it’s been a simple case of pushing or hammering out the dents. 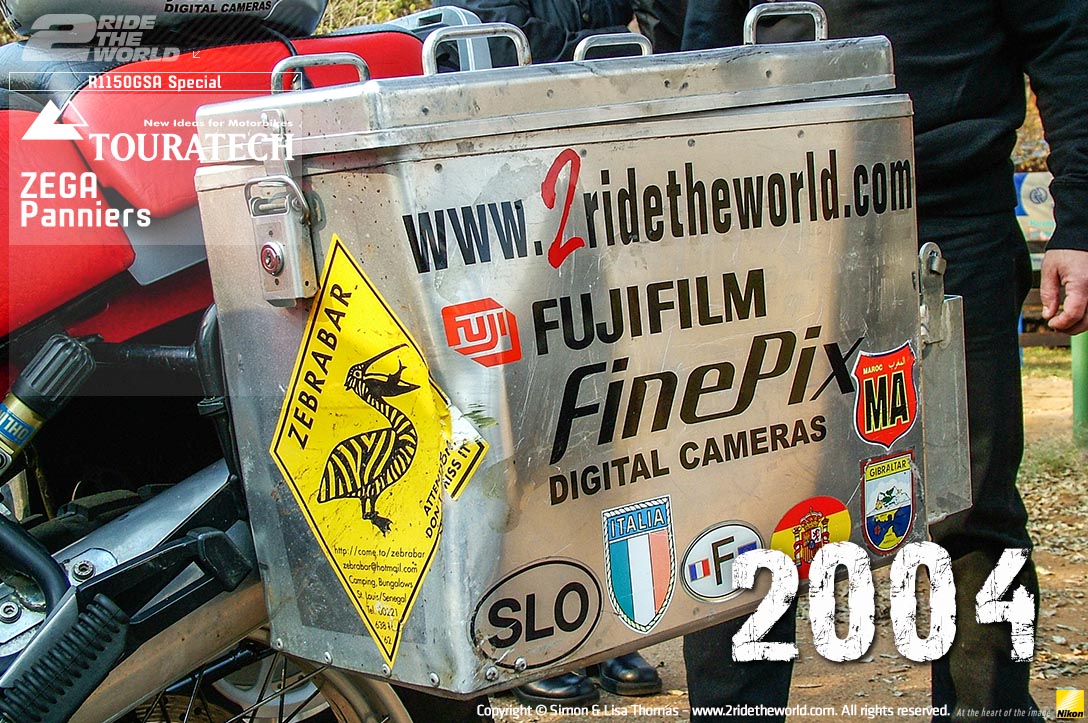 A thicker seam around the top of the pannier body provides a strong seal between the pannier and the lid keeping our gear dry. 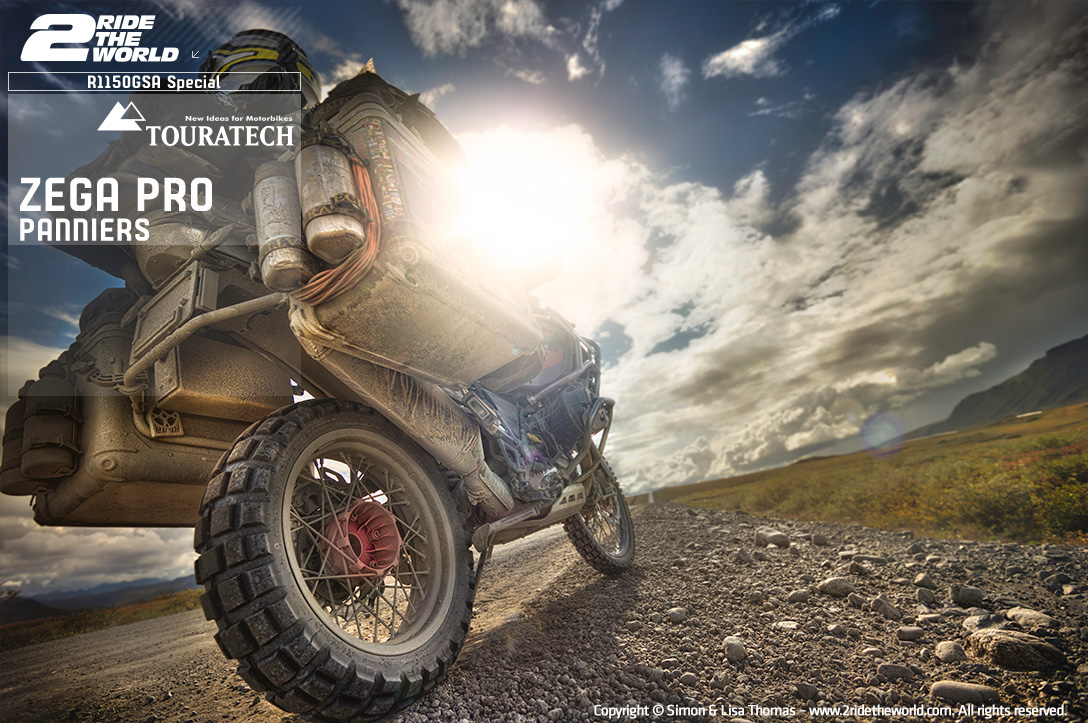 On my new R1200GSA LC I gone with a 38 liter ZEGA PRO on the right hand side and a 45 liter pannier on the left. This configuration still enables me enough room to lane-split in heavy traffic.