Today was an unforgettable day. Today was the day we had decided to visit Auschwitz and Birkenau.

Our trip from its inception is about trying to understand the World we live in. The atrocities that happened here, Lisa and I will never understand, but visiting will ensure we never forget!

As we drove to Oswiecim both of us were a little apprehensive – this is not the type of day you say you look forward to – but in our minds it was a 'must' visit to make.

We had no idea really as to what to expect, OK, we had read our history books and seen the films like Schindlers List – but was this going to be anything like what we had watched and read?

The first surprise was that it was not clear as to where exactly Auschwitz was. There were no obvious signposts and from the centre of Oswiecim we had to head North out of the town. We only knew this as an English couple had visited the day before and given details as to exactly where it was placed.

Again, it was strange when we arrived as, quite suddenly, there it was – AUSCHWITZ. A name now synonymous with death.

For most of us, Auschwitz is a place ingrained on our minds since childhood, linked through all those history lessons with horrific injustice, barbarism and death. It felt a little unnerving to be here. 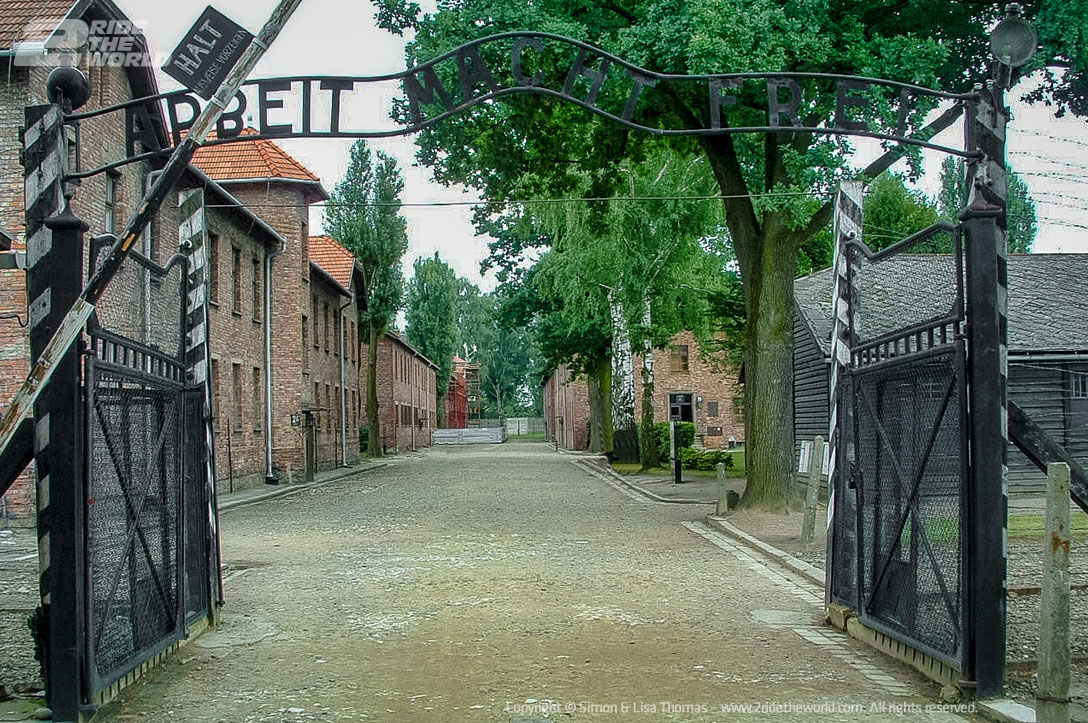 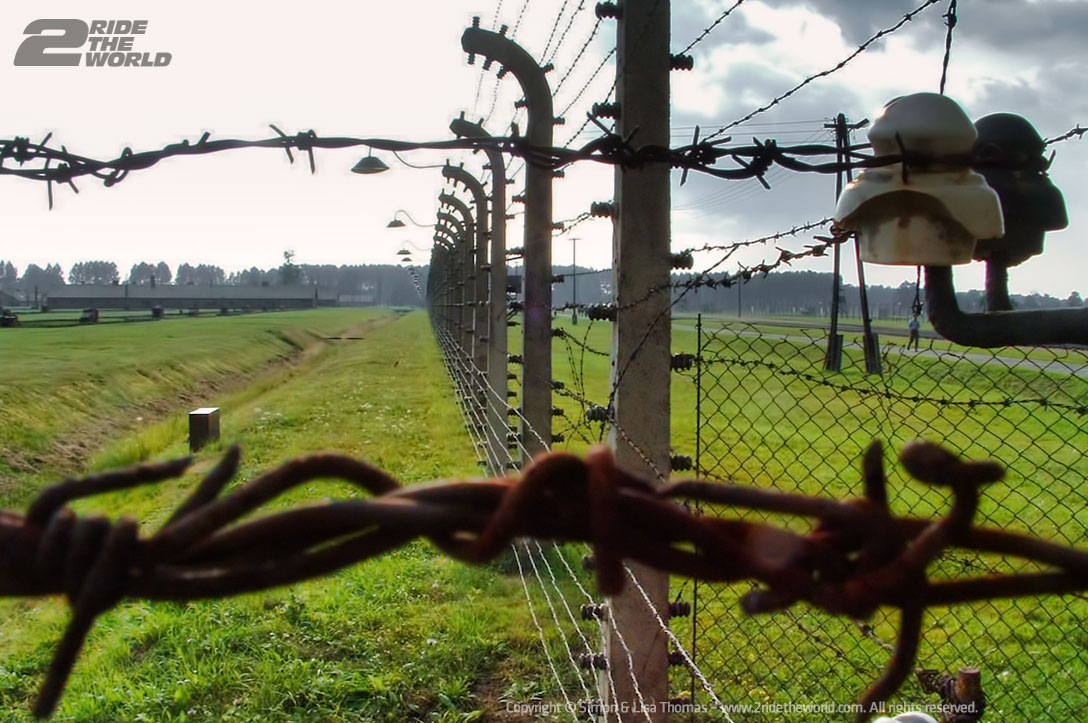 Initially, you enter the car park and new, clean fresh tarmac greets you. A little further on we found the normal tourist facilities with a typically modern tourist information area and food hall where you can choose from pizza, burgers etc. We both noted that everything from the info signs to the decor were muted. Its difficult to explain, but both of us felt awkward and almost embarrassed that there was such food readily available. Many people had travelled a long way to get here and when we arrived we also needed something to eat. However, despite ordering a small pizza we didn’t feel comfortable enjoying our food so close to where thousands had starved to death – maybe this was just us being too sensitive as the whole town of Oswiecim is now just a normal working town with the atrocities of 60 years ago just history and not memories for many of its residents.

Entering the gates to the camp (known, not as a concentration camp but a death camp) a cold shiver made its way down our backs. How many thousands had walked through these very gates only to meet their end, hours, days or weeks later? The figures are said to be at least 1.1 million prisoners died at Auschwitz, around 90 percent of them Jewish. 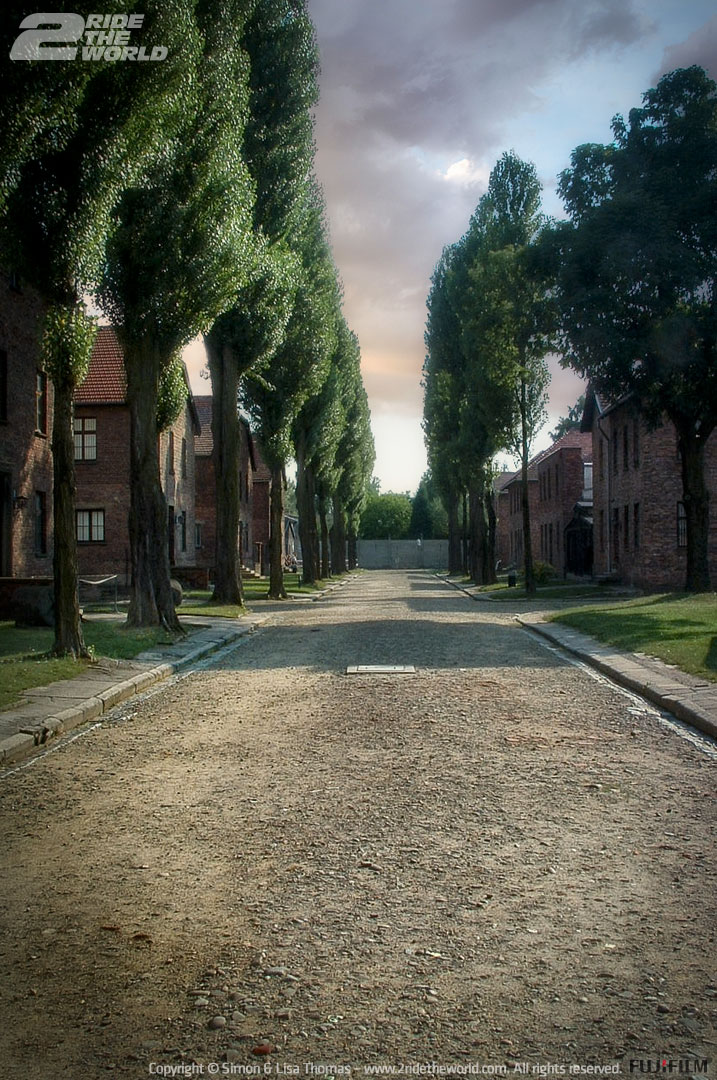 What struck us both was how new all the buildings looked – this more than anything hammered home that the this is not ancient history but very recent. The idea that all that happened here was long, long ago makes us all feel a little better and perhaps allows us to mentally deal with the facts at arms length, as though it doesn’t effect us. The ‘up close’ experience of actually being here and the realisation of how recently the events took place really packs a powerful blow.

We can’t explain what we felt as we walked around being shown the "Death Wall”, the collective gallows, block 10, where many women were ‘experimented’ upon, the gas chambers and crematoria, where we also saw photos of people entering the gas chambers. They all look so composed. They had been told that this was a shower area – of course no water came, just the poison Cyclon B (a highly lethal cyanide-based pesticide). As the tour continued the mood and atmosphere of the group became more solemn, with expressions of disbelief increasing, as we were shown more. 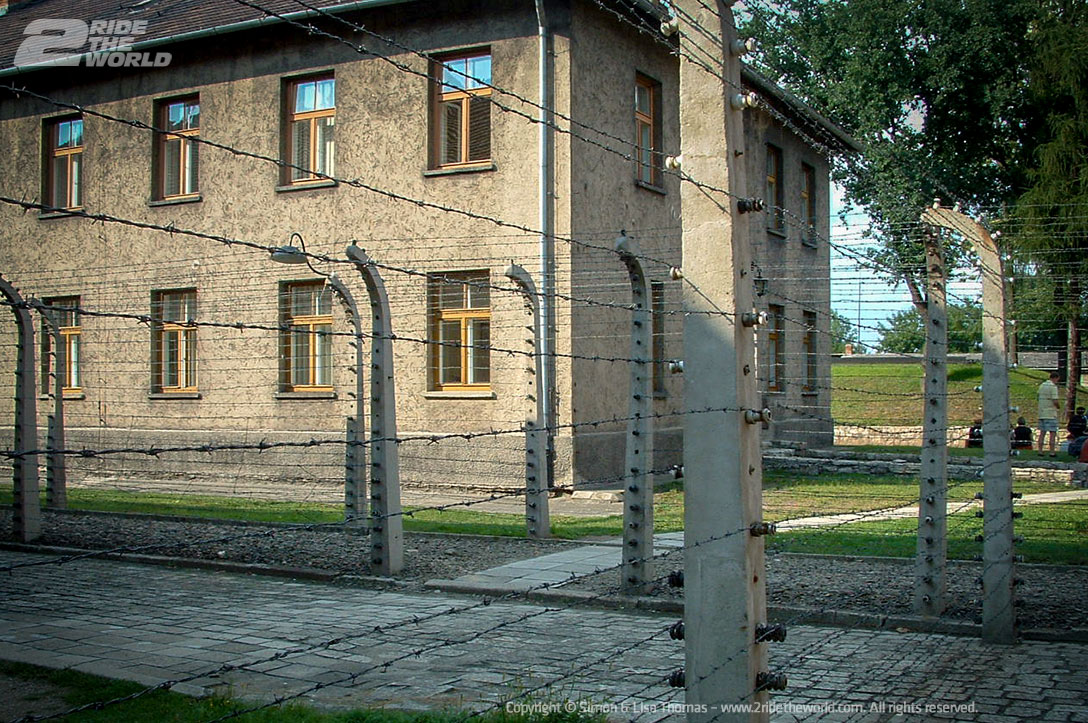 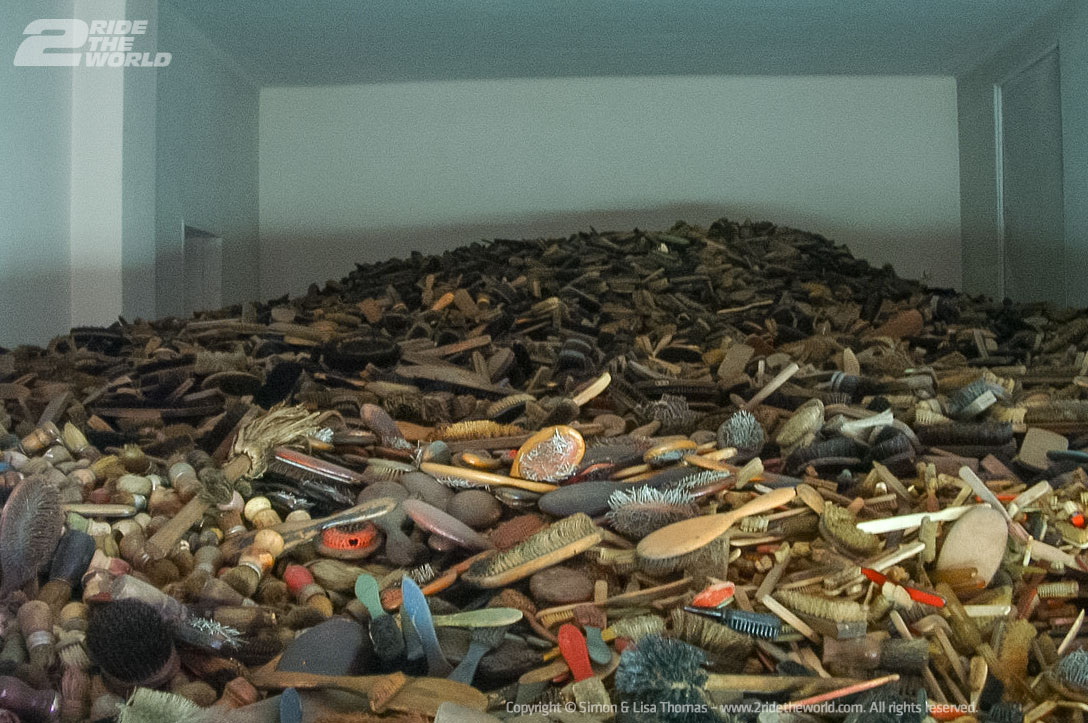 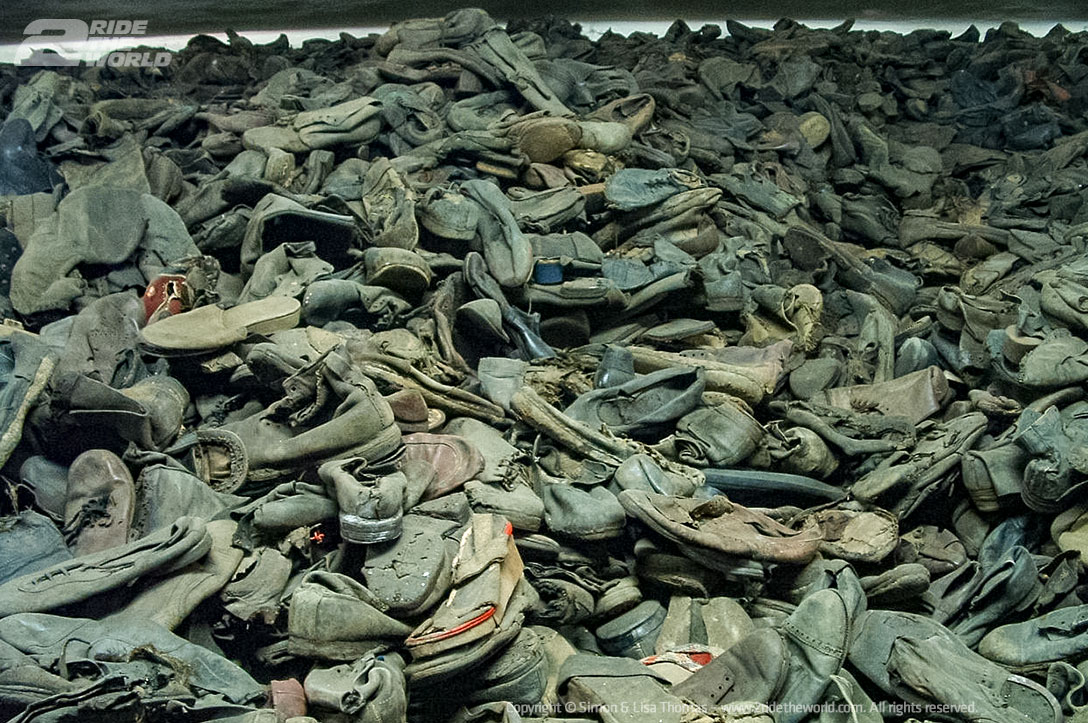 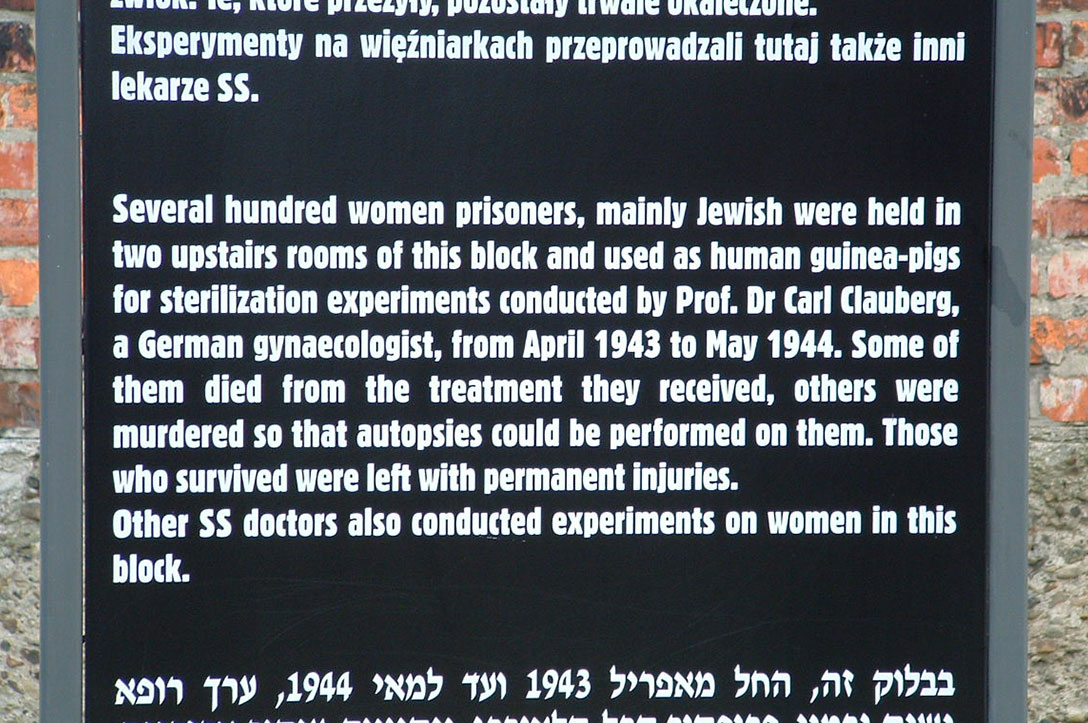 All others that we saw were silent and strained. The only way we can explain it is that a heavy sadness sits in your chest. There is a feeling of disbelief that things like this can happen and the question ‘Why- how could these things happen?’ keeps coming into your mind. As you are told ‘why’ your history lessons are remembered with painful accuracy and the full beliefs of the Nazis is explained to you. But, this is very different from sitting in a sterile classroom with a book and some black and white footage in front of you.

On liberation of the camp we were told that the Soviet Army discovered approx. 7,000 kg of hair from women. The hair was packed into large bags and was being prepared to be sent to the cities were it was used for producing tailors lining cloth. A large room with Perspex sides now displays some of the hair. The room is completely full from floor to ceiling. It’s a very uncomfortable sight and one we wont ever forget. We saw rooms of personal items; glasses, suitcases, enamel bowls, hairbrushes, shoes – thousands upon thousands of them – all at one time belonging to people who thought that they were being sent to a ‘place of work’.

However, despite the atrocities we were both struck with the fact that Auschwitz now feels very peaceful. We had expected to feel some kind of bad ‘vibes’ but were surprised that this was not the case. Maybe others may not feel the same and may not understand why we felt this way.

We then made a short visit to Auschwitz II-Birkenau,(KL Auschwitz 2, 3km away), which was a purpose built death camp built in order to ‘ease congestion' at the main camp. When we arrived we walked across to the main entrance and immediately recognised the two crossing train tracks that led into the main area. It was quite a shock to see it really as it has always been. Our tour ended with the final information that when Birkenau was liberated, among the items found by the Russians were 370,000 men’s suits, 837,000 women’s garments, and 7.7 tonnes (8.5 short tons) of human hair. The estimated number of victims are 2,1 to 2,5 million, however, its widely thought that the figure is closer to 4 million. 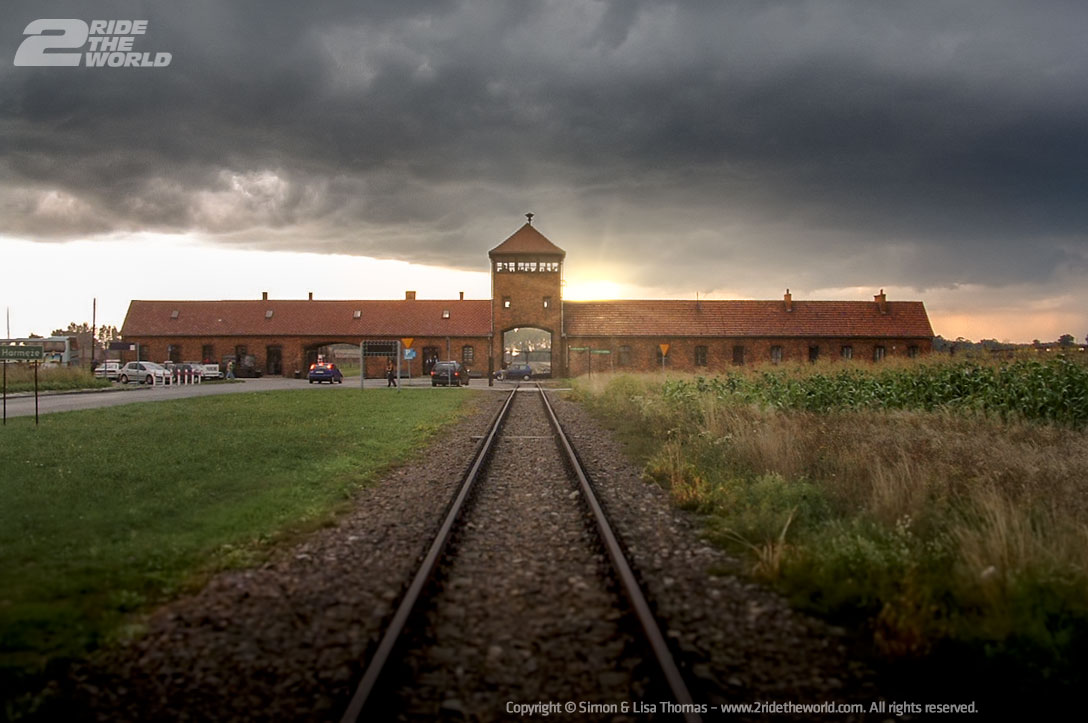 We were left physically and emotionally drained. The one main thought that did come from our visit was summed up in a quote we saw on one of the walls “Those who do not remember history are destined to live through it again”.